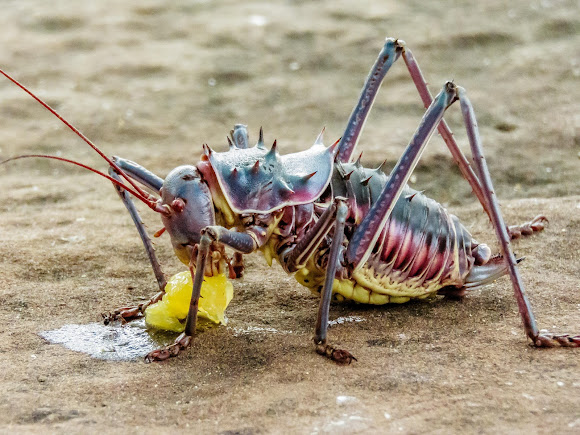 These insects were widely distributed in northern Kruger Park in April 2017. They were seen on the road where they were readily run over by motor vehicles. The live ones were keen to feed upon their lest fortunate colleagues.

Armoured ground cricket (Acanthoplus discoidalis). Very keen on eating fresh mango. Who can blame it? Tshanga Lookout. April 2017. Acanthoplus discoidalis is a species in the Bradyporinae, a subfamily of the katydid family (Tettigoniidae). Like its closest relatives, Acanthoplus discoidalis variously bears common names such as armoured katydid, armoured ground cricket, armoured bush cricket, corn cricket, setotojane and koringkriek. The species is native to parts of Angola, Namibia, Botswana, Zimbabwe and South Africa. Note that the common names are characteristically misleading; the species is not closely related to true crickets, which are a different family, the Gryllidae. Information from Wikipedia.