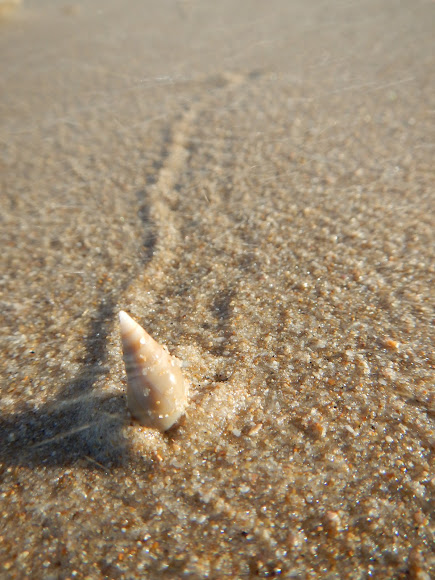 Discovered a group of these on a beach in Jeffrey's Bay, South Africa. Not sure what exact type they are but it looks like they either move with the tide or slowly work their way back to the shoreline. When the tide starts to rise, this snail emerges from the sand, spreads its large "foot" like a sail, and surfs up the beach in response to the smell of carrion. The large foot is also used to burrow into the sand when the tide recedes. Sticks its proboscis into the prey to suck up soft tissues.

Sandy beaches along the surf zone, low on the shore from middle tidal zone seawards where the sand is not too coarse

These dominant scavengers scent decaying animal matter from a considerable distance so that they converge from all directions to feed.

Here is a spotting showing then during feeding time! http://www.projectnoah.org/spottings/180...

Thanks Mark, just goes to show what a little research can do!
Scott, thank you. I took this photo this last summer and actually realized what it was when I watched the BBC "Blue Planet". They had a short segment on these amazing creatures but I could not remember what they were called. Just another example of how larger animals are great but how the smaller creatures can be the more captivating!

Brilliant job Arya! Something new for me too.

Wow Arya, one learns something new everyday! Great work. I've seen so many hermit crab trails that I just thought...especially after seeing them in similarly shaped shells too http://www.projectnoah.org/spottings/172... Here is a link that illustrates this phenomenon with Bullia digitalis http://www.dewilde.co.za/TheWildeCoast/B... I still don't understand how it leaves marks "identical" to a hermit crab! This is available for download free on the internet "Surfing in the sandy-beach whelk Bullia digitalis". Perhaps I'll read it.:-)

Plough snails are really cool, love finding them on the beach.

Ok Scott, I found it! It is a Plough Snail. These guys wait in the shallow surf until the tide starts coming in. They then come out the sand and use their "foot" as a sail to catch the waves and head towards shore where their dinner awaits!

Thanks again, I'll change the title.

The shell belongs to a gastropod (snail) but now it is only the house for the crab in your spotting :-)

Wish I would have gotten a picture of the group. There was more than just the one with the same trail. Any chance you can identify the original owner of the shell? I have been looking but can't seem to find a match. You are probably right though, a hermit crab is the only plausible match. Thanks Scott

Yes, it's a hermit crab in that shell. Hermit crabs can use any shell that fits. See http://images.travelpod.com/tw_slides/ta...

possibly, I didn't pick it up to find out. didn't want to disturb them. I know there is a snail that will ride the tide in to feed on decaying fish but they are much bigger. might be in the same family though.