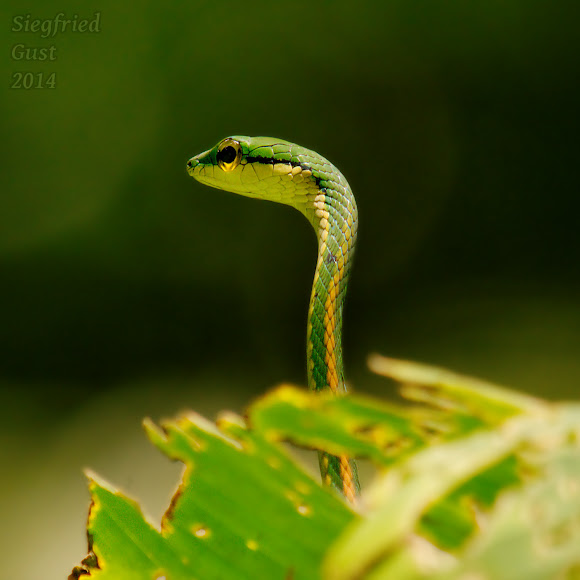 Long slender green snake with a yellow line running down it's back and on each side, white below the yellow stripes on it's sides.Large golden yellow eyes that continue a black stripe on each side of the head through them.

Was found on top of a large Heliconia leaf next to a trail though a forest.

I'm a little unsure as to the ID on this snake, as I've photographed other Leptophis ahaetulla in this same area that were a very close match for images that I've found online. You can check one of them out here, http://www.projectnoah.org/spottings/309... This has several features that are different from others I've encountered. It has Yellow stripes running down it's back and sides and below the side stripes it's white. I know this species is pretty variable, but due to the fact that I've seen quite a few that were all pretty much like the one in the spotting above, I'm wondering if this might be a different species of snake that I just haven't been able to find any reference to.

SG in CR 8 years ago

Translation for those who don't understand Spanish. Manuel's suggestion of L. mexicanus has a loreal scale according to the species description in the link I posted. The snake in my posting doesn't have a loreal scale.

SG in CR 8 years ago

What a nice encounter!

What a great capture! Nicely done!