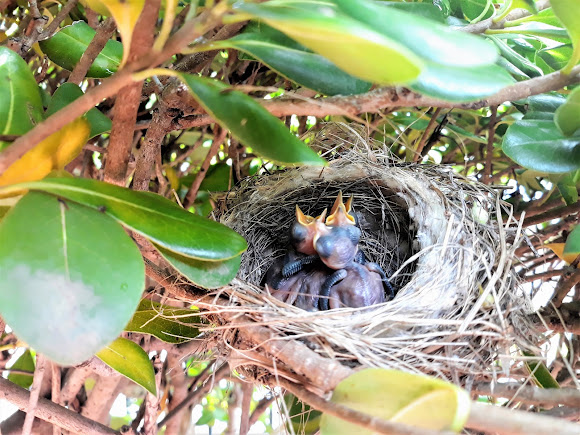 Bird with a dark hood, which reaches to below the eye. Males have grayish upper parts, in contrast to the paler lower ones, and have a black head, in which the red eye ring and the white throat stand out. Females are more brownish on the back, with pale brown ventral areas and a grayish head. Both sexes have a reddish eye ring, light legs (orange in males), and white outer tail feathers.

Mediterranean coast and the southern half where it has a permanent presence, but it is also located in many parts of the northern half, appearing in this way and in isolation in the Duero river basin, being discontinuous in the Ebro. The coast of Pontevedra, some areas of the coasts of La Coruña and the Miño river basin are permanent. As a nesting it is present in all the Spanish Autonomous Communities except Asturias. As for the Spanish islands, they occupy both the Balearic Islands and the Canary archipelago where it is widely distributed.

Any young is a precious sight.