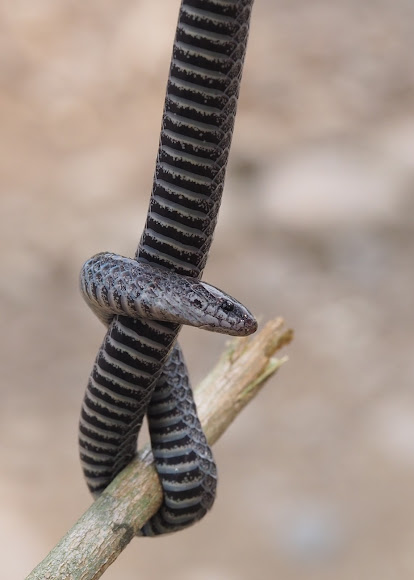 Seen In Gibbon WLS, Assam, NE India. The Hoollongapar Gibbon Sanctuary, formerly known as the Gibbon Wildlife Sanctuary or Hollongapar Reserve Forest, is an isolated protected area of evergreen forest located in Jorhat district of Assam, India. It is small, 20.98 sq. kms, surrounded by tea plantations and human settlements. The Hoollongapar Gibbon Sanctuary is classified as "Assam plains alluvial semi-evergreen forests" with some wet evergreen forest patches. It receives 249 cm (98 in) of rainfall on average per year. and is situated at an altitude between 100 and 120 m (330 and 390 ft). It is home to 7 out of the 15 species of apes found in India and also the Bengal slow loris and is a wonderful place to find butterflies.

Leuba, someone questioned whether it should be allowed on PN because it was being held. I explained that the local guide picked it up to show me and I took 3 or 4 quick photos then put it back on the path and it continued on its way. He seemed to know how to handle snakes and definitely didn't hurt it.

Wow ! Congratulations Pam. Why controversial ? It is a beauty.

thanks Daniele for giving this controversial spotting the SOTD. Personally, I love this photo. Beautiful little snake...

Congratulations pamsai, this beautiful snake is our Spotting of the Day:

"Blyth's reticulated snake, also known as the iridescent snake, is our Spotting of the Day! This beautiful colubrid snake is found in parts of India and Southeast Asia. For nearly 150 years the genus Blythia was monotypic, which means that it contained one single species. In 2017 a second species in the genus Blythia was described, Blythia hmuifang, on the basis of four specimens originating from the state of Mizoram, India".

Yes Neil, they shone like rainbows in the sun...

That's a beautiful snake, Pam, and those scales look so polished. Wonderful:)