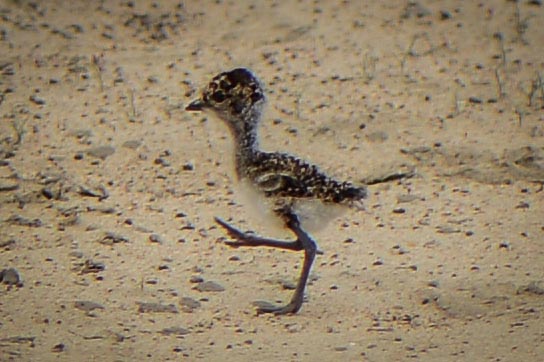 Very well camouflaged chickens. But despite being just a few days old, they already have the "walking characteristics" of their parents. This was a family of two adults and two chickens. The parents tried to get the small to walk by calling them, but they just walked a fem meters before they fell, or just lay down to rest a little bit.

Open habitat where the grass was recently burned off, and new sprouts grew after four days of rain.

This species is an intra-African migrant that may undertake regular seasonal movements. It breeds in loosely colonial groups with several pairs scattered over a small area, the timing of breeding varying geographically. The species inhabits dry, open habitats such as lightly wooded savannas, open grassland with bushes and scrub, patches of burnt grass in Accacia spp. woodland and sparsely vegetated short grassland. It shows a strong preference for burnt grassland with newly sprouted grass especially if this is in the vicinity of water. It can also be mentioned that the Black-winged Lapwing (Vanellus melanopterus) is very similar to the Senegal Lapwing. The two species can be separated when seen in flight, but also by their respective habitat preferences, the Senegal Lapwing preferring lower, mostly drier locations.

Great photos,ty for sharing them.

Thank you Adarsha! And they had the cutest little walk as well :D Marching minions :D
Thank you Vivian, Leuba, Karen and Staccyh :)
Gilma, how sweet of you :), but it always sounds worse on the news than it actually is in reality...

Very cute..:) You always bring some special and cute fellows :)

I love lapwings - lovely spotting! The baby is too cute for words!

Take care of yourself Tiz, you are so brave to be there right now, be careful and be safe.

It was just a matter of time before the situation there would get worse. Last week when I passed the area I was escorted through the "rough regions" in Sofala (River Sabe and Moxungue, about 110km). But north from Muxungue (Gorongoza town, and Inhope) the situation was concidered calmer.

It is municipality elections very soon, and there has been a few assaults in the Sofala region (where the oposition is based, as you mentioned) due to that. What is even worse is that the soldiers do some random raiding due to hunger and unpaid wages. I am safe, and I managed to drive back to Maputo with no more incidents that a flat tire.

Next year the presidential election will be held, and that is a bad year to visit this country... Anything can happen...

Thank you for the nice words on this spotting to you Antonio, Stian and Ingrid :)

Great capture Tiz,super cute chick.
I heard bad news about the area where you are:-( is everything ok with you?
Renamo headquarters are in Gorongoza region and yesterday there was an atack by Frelimo forces there,so be very carefull,the news we haved here say that Dlakama is missing and that he says that the peace treaty is broken,so the situation can became worst.
i tried to chat with out of the spottings

Great pictures Tiz! The little one is so cute :)

cute as can be!

Thank you Anne Marie McCaffrey, indeed they are! And they had the funniest walk as well!

Great spotting. The chicks are so cute.

Ye, the small chickens are adorable! Thanks Kel :)

Thank you Ava T-B :) They were lovely. I almost started to chirp when I saw them, haha!