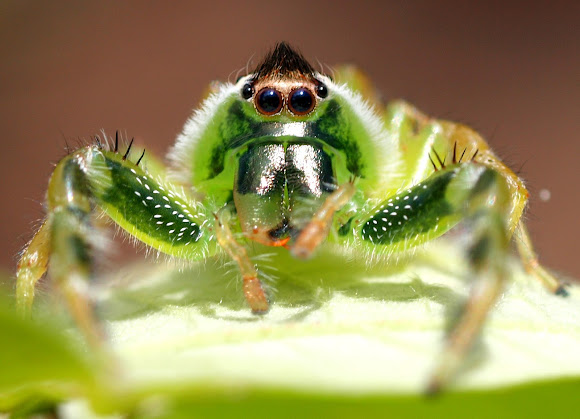 The genus Mopsus has only one spider . It is the largest Australian jumping spider, found throughout the warmer regions in the northern part of Australia down as far as Coffs Harbour. Green Jumping spiders are large, beautiful, fast spiders and aggressive predators. They hunt actively on foliage in the day time and can inflict a painful but not lethal bite with large fangs. Due to the whiskers on the sides of their faces and their big eyes the males have a strange baboon-like appearance. Females and males are about the same size, unusual in spiders where males are often smaller. Both males and females hunt during the daytime, camouflaged against green leaves. Often you can't spot them until they move. They are ready biters and can inflict severe pain. Females build their nests and egg sacs between leaves. They prey on insects and other spiders.

These little guys are so photogenic! Great photos Mac! Congratulations!

Congratulations Mac.. It's beutiful series.. I like the color of the hair.. It's very cool.. :)

Oh, I love that your spider is famous! Superb shot (forgot to mention that in my previous comment :) )

Very nice series! Congratulations on your spotting of the week! :)

and 60 other people favorited this spotting