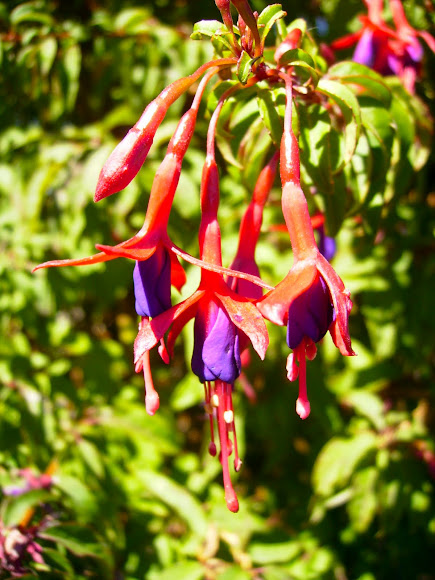 There are currently almost 110 recognized species of Fuchsia. The great majority are native to South America, but with a few occurring north through Central America to Mexico, and also several from New Zealand to Tahiti One species, Fuchsia magellanica, extends as far as the southern tip of South America, occurring on Tierra del Fuego in the cool temperate zone, but the majority are tropical or subtropical. Most fuchsias are shrubs from 0.2–4 m (8 in–13 ft 1 in) tall, but one New Zealand species, Kotukutuku (Fuchsia excorticata), is unusual in the genus in being a tree, growing up to 12–15 metres (39–49 ft) tall. Fuchsia leaves are opposite or in whorls of 3–5, simple lanceolate and usually have serrated margins (entire in some species), 1–25 cm long, and can be either deciduous or evergreen, depending on the species. The flowers are very decorative, pendulous "eardrop" shape, borne in profusion throughout the summer and autumn, and all year in tropical species. They have four long, slender sepals and four shorter, broader petals; in many species the sepals are bright red and the petals purple (colours that attract the hummingbirds that pollinate them), but the colours can vary from white to dark red, purple-blue, and orange. A few have yellowish tones, and recent hybrids have added the colour white in various combinations. The ovary is inferior and the fruit is a small (5–25 mm) dark reddish green, deep red, or deep purple, edible berry, containing numerous very small seeds. Many people describe the fruit as having a subtle grape flavor spiced with black pepper.