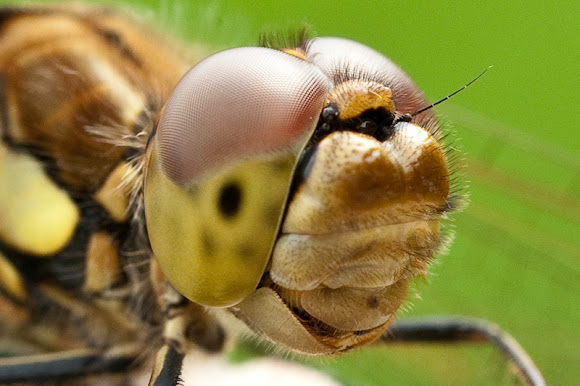 Adults can be seen on the wing all year round in southern Europe but in northern regions they occur from June to November. This small Dragonfly is seen in a wide variety of habitats, including lakes, ponds, canals and slow-flowing rivers. They are ambush predators, waiting on a prominent perch - such as a leaf or the top of a gate, until prey fly past, whereupon they will fly after it. They are territorial on breeding waters, often attempting to chase much bigger Dragonflies away such as Southern Hawkers. This habit of repeatedly returning to a sunny spot allows you to easily predict where they are going to land, which is why it is one of the easiest dragonflies to photograph.

On the border of forrest and grassland. Water nearby.

@ClairePelletier Oephf, Dutch, English and German are okay, but my French is rather rusty...

Thanks @taka.ita, I've updated the ID. The funny thing is I identified it as Vagrant Darter in an other spotting: http://www.projectnoah.org/spottings/685...

Not a Common Darter but a Vagrant Darter (Sympetrum vulgatum). Look at the "moustache" and also the pointy ovipositor (visible on photo #4) makes clear it is a female Vagrant Darter.

@AlaiLanda Nice story, never heard something like that before. I must say most of the time they take off as soon as you come close. At least that's what they do in the Netherlands.

yes here in costarica we have a lot of them :)

Beautiful series and stunning details in the first photo!

Thanks @Chris. It was a 'lazy' sunny afternoon. The darter was slow and gave me plenty of time to get close and take my pictures :-)

@MaryOhkwari Your welcome :-).
I must say that I was fine taking these picture. But seeing them on a large screens makes me realize what entomophobia could feel like!

Awesome series... beautiful shots like these really help me in my desire to get past my entomophobia.

Too close for comfort!

@Tweact, just to show he's not smiling I've added a more detailed picture of his face and mouth. He needs to shave badly,... you don't want to meet him after dark :-)

and 60 other people favorited this spotting