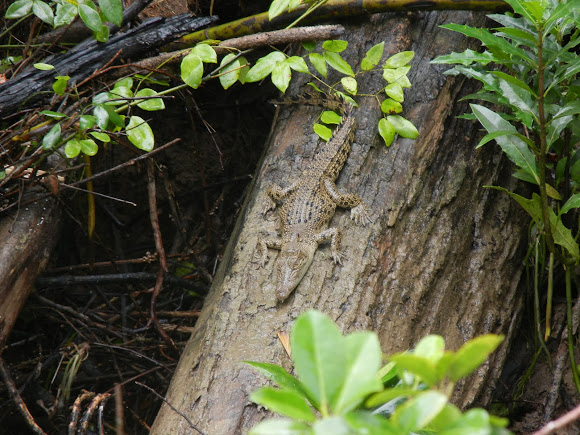 On part of the Daintree Tours with Grant we did a River Cruise, where our Captain (Bruce) spotted this young crocodile.

The Captain believed that this young crocodile was approximately 13 months old since he recalled when he started seeing a number of babies coming into the river system. There are paths created by the crocodiles within the mangroves where they then build their nests. One of the pictures shows a trail where Captain Bruce indicated that the baby crocodiles likely came from.

Hello. Since you know the identity of your organism (from your use of a common name), please go ahead and fill in the scientific name field. In this case for the "saltwater crocodile" it is Crocodylus porosus. This allows the spotting to be correctly entered into the database and become a complete record, letting groups and individuals use the data and find your spotting. It also takes the spotting off the "unidentified" list. If you are interested in learning how species are named and why this is important, see Project Noah's blog entry http://blog.projectnoah.org/post/2870249... Thanks!