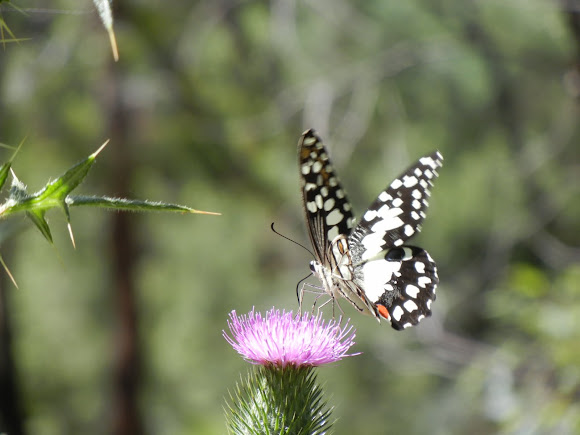 Beautiful butterfly was on top of a thistle in the Australian Capital Territory at the Tidbinbilla Nature Reserve. Just there for a moment, I was only able to do one picture before it took off. I'm leaning towards Papilo anactus - please advise.

Forested region dominated mostly by eucalpyt and gum trees. There were some flowering plants and shrubs nearby.

This was on a lookout on top of a hilltop that described the surrounding area as it was recovering from a horrific fire that occurred around 2004 or so.

I think you have a Checkered http://www.brisbaneinsects.com/brisbane_.... Remember that a lot of our insects have a great deal of variability.

Your right the wings don't look quite like anactus or demoleus. I should just google Australia Papilio species but then the problem would be finding a sight I can actually trust.

The dot you're referring to is called a tornal spot and is commonly seen in the Lime Swallowtail. But the wing structure has me second guessing myself.

Not anactus because the butterfly you spotted has only one red-orange dot on the bottom of each wing, while anactus has many much smaller ones. I'll research it and see if I can find the right species.