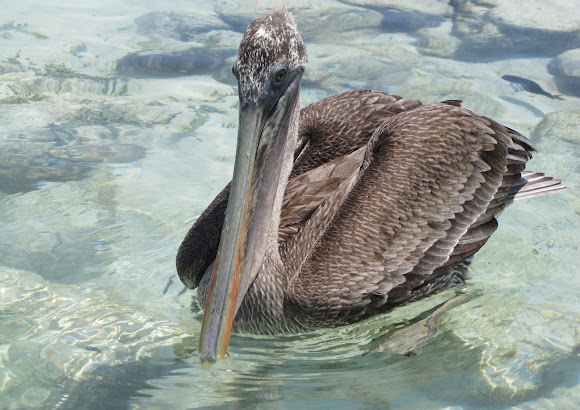 The Brown Pelican occurs on coasts in the Americas from Washington and Virginia south to northern Peru and the mouth of the Amazon River, as well as the island of Saut d'Eau in Trinidad and Tobago. Some immature birds may stray to inland freshwater lakes. After nesting, North American birds move in flocks further north along the coasts, returning to warmer waters for winter. Their young are hatched in broods of about 3, and eat around 150 lbs. of fish in the 8–10 month period they are cared for. This bird is distinguished from the American White Pelican by its brown body and its habit of diving for fish from the air, as opposed to co-operative fishing from the surface. It eats mainly fish and amphibians as well as crustaceans. Groups of Brown Pelicans often travel in single file, flying low over the water's surface. The nest location varies from a simple scrape on the ground on an island to a bulky stick nest in a low tree. These birds nest in colonies, usually on islands.

This first is a really gorgeous shot. The colors are awesome.