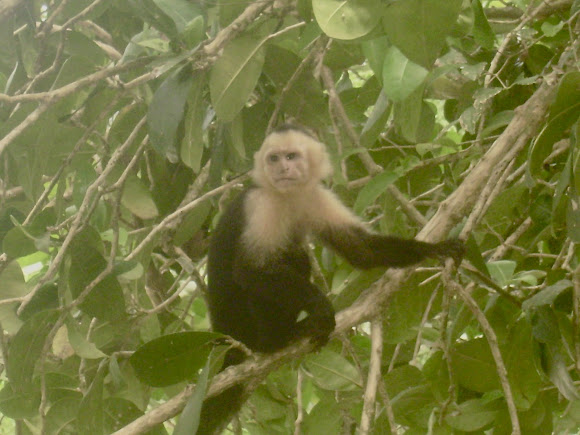 The white-headed capuchin has mostly black fur, with white to yellowish fur on the neck, throat, chest, shoulders, and upper arms. The face is pink. A V-shaped area of black fur on the crown of the head is distinctive. It has a prehensile tail that is often held coiled, giving the white-headed capuchin the nickname "ringtail". Adults reach a length of between 335 and 453 mm (13.2 and 17.8 in), excluding tail, and a weight of up to 3.9 kg (8.6 lb). The tail is longer than the body, at up to 551 mm (21.7 in) in length. Males are about 27% larger than females.

The white-headed capuchin is found in much of Central America and a small portion of South America. In Central America, its range includes much of Honduras, Nicaragua, Costa Rica and Panama. It has also been reported to occur in eastern Guatemala and southern Belize, but these reports are unconfirmed. In South America the white-headed capuchin is found in the extreme north-western strip between the Pacific Ocean and the Andes Mountains in Colombia and northwestern Ecuador.