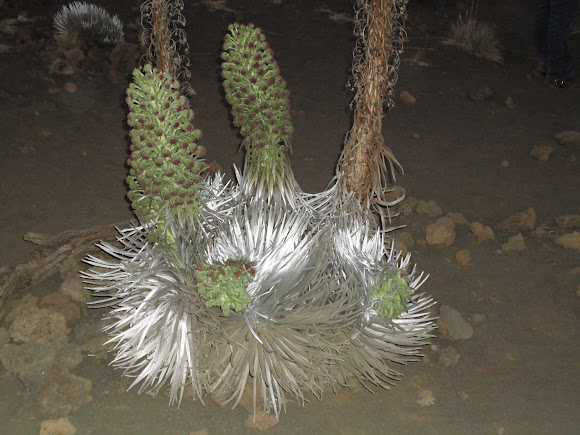 The Haleakalā silversword (Argyroxiphium sandwicense subsp. macrocephalum) is a rare plant, part of the daisy family Asteraceae. The silversword in general is referred to as ʻāhinahina in Hawaiian (literally, "very gray").

The Haleakalā silversword is found on the island of Maui at elevations above 2,100 metres (6,900 ft) on the dormant Haleakalā volcano — on the summit depression, the rim summits, and surrounding slopes — in Haleakalā National Park. The Haleakalā silversword has been a threatened species as defined by the U.S. Fish and Wildlife Service, since May 15, 1992. Prior to that time, excessive grazing by cattle and goats, and vandalism inflicted by people in the 1920s, had caused its near extinction. Since strict monitoring and governmental protection took effect, the species' recovery is considered a successful conservation story, although threats remain.

This was observed during ALI'I activities at Mauna Kea at the Hale Pokaku enclosure near the Onizuka Center for International Astronomy.