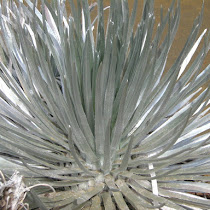 Share photos of Hawaii's indiginous and endemic plant species so that others around the world may marvel at the Hawaii's unique flora splendor. Many people assume certain plants that grow in Hawaii are "native" when indeed they are alien/introduced. Sign in to join mission

The Hawaiian islands are the most isolated archaepelago in the world which has given way to an amazing array of endemic species, species that have evolved from their original immigrant ancestors to be specially adapted to Hawaii. Hawaii holds the highest degree of endemic plant species than any other major island group. About 90 percent of the 1000 or so species of native flowering plants are endemic and 70 percent of the 150 or so species of native ferns are endemic. The main factors for such a high degree of endemic plants are as follows: 1.Hawaii's many microclimates and microhabitats making the chance for survival higher for seed or spores. 2.Isolation of the islands restricts gene flow and allows for speciation to occur. This can even happen between islands! Example: there are five species of the genus Argyroxiphium which include the magnificent Silversword plant. One species, the greensword is only found in Maui. 3.Plants that once produced their chemical and mechanical defenses evolved to lose these defenses and adapted to coexist with the new animals that were around them. Example: Lobelia flowers and Honeycreeper birds- the Flower shape matches the bird's beak (vice versa). The first Hawaiians also introduced many plant species, such as their staple food Taro. They also introduced banana, sweet potato, breadfruit, noni as well as many other useful plants for medicine, fiber and oil. For more Information on Hawaii's endemic and endangered plants see: Endangered Plants and Threatened Ecosystems on the Island of Hawaii by Juvik, DeLay, Merlin, Castillo, Perry, Kinney Atlas Of Hawaii by Juvik La'au Hawaii- Traditional Hawaiian Uses of Plants by Isabella Aiona Abbott Plants in Hawaiian Culture by Beatrice H. Krauss