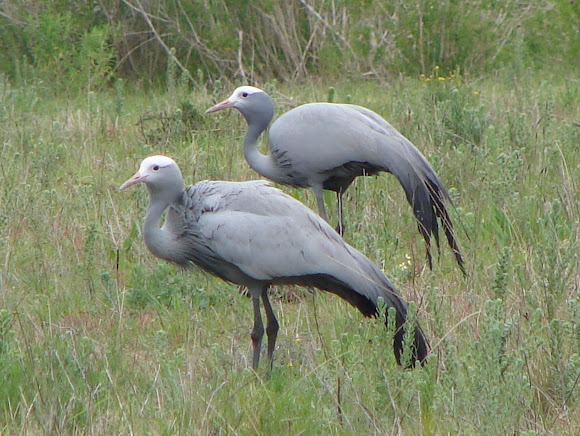 The Blue Crane (Anthropoides paradiseus), also known as the Stanley Crane and the Paradise Crane, is the national bird of South Africa. It is a tall, ground-dwelling bird, but is fairly small by the standards of the crane family. It is 100–120 cm (40–47 in) tall and weighs from 4 to 6.2 kg (8.8-13.6 lbs). This crane is pale blue-gray in colour with a white crown, a pink bill, and long, dark gray wingtip feathers which trail to the ground.

Blue Cranes are birds of the dry, grassy uplands which feed on seeds and insects and spend little time in wetlands. They are altitudinal migrants, generally nesting in the upper grasslands and moving down to lower altitudes for winter. Many occupy agricultural areas. Of the 15 species of crane, the Blue Crane has the most restricted distribution of all.

While it remains common in parts of its historic range, and approx. 25,700 individuals remain, it began a sudden population decline from around 1980 and is now classified as vulnerable. In the last two decades, the Blue Crane has largely disappeared from the Eastern Cape, Lesotho, and Swaziland. The population in the northern Free State, KwaZulu-Natal, Limpopo, Gauteng, Mpumalanga and North West Province has declined by up to 90%. The majority of the remaining population is in eastern and southern South Africa, with a small and separate population in the Etosha Pan of northern Namibia. Occasionally, isolated breeding pairs are found in five neighboring countries. The primary causes of the sudden decline of the Blue Crane are human population growth, the conversion of grasslands into commercial tree plantations, and poisoning: deliberate (to protect crops) or accidental (baits intended for other species, and as a side-effect of crop dusting). The South African government has stepped up legal protection for the Blue Crane. Other conservation measures are focusing on research, habitat management, education, and recruiting the help of private landowners.

Please consider adding this spotting to the Cranes mission. It is currently a local mission, but I have requested to have it moved to global. Thanks!

Hi Gordon, thanks for your comments. On this particular day I happened to have my camera as I was off to look for the Yellow-Billed Duck I had seen the previous day and right there outside my front door (at the farm I used to stay on in Stanford) were the Blue Cranes - I must have taken about 180 photos...

Yes I have! Great place with a wonderful mission. I follow the whooping crane migration to Florida as a result - used to follow it in with my Bio classes as well.

I did work at ICF. I managed much of the education programming for about 10 years. It's an effective organization with a great mission. It sounds like you've been there.

Gordon - did you work with the Crane Foundation in Wisconsin? That place is magical

I worked with cranes for many years, including blue cranes. Such gorgeous birds, fascinating behaviors. I've never seen them in the wild though. Thanks for posting this sighting.