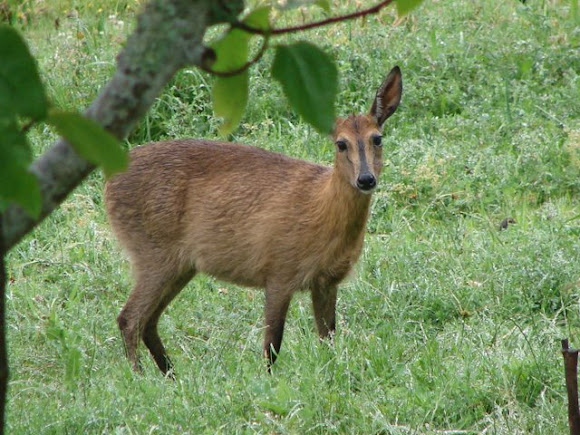 The Common Duiker, Sylvicapra grimmia, also known as the Gray or Bush Duiker, is a small antelope with small horns found in west, central, east, and southern Africa- essentially everywhere in Africa south of the Sahara, excluding the horn of Africa and the rainforests of the central and western parts of the continent.

Generally they are found in habitat that has sufficient vegetation cover to allow them to hide—savanna and hilly areas, including the fringes of human settlements.

Colouration of this species varies widely over its vast geographic range. There are thought to be as many as 19 subspecies ranging from chestnut in forested areas of Angola to grizzled gray in northern savannas and light brown shades in arid regions. It grows to about 20 inches (50 cm) in height and generally weighs 12 to 25 kg; although females are generally larger and heavier than their male counterparts. The male bears horns which can grow to 4.25 inches (11 cm) long. Breeding is year round and the female gives birth to one fawn after a gestation period of what is variously estimated at 3 to 7.5 months. The common duiker has a wide diet; beyond herbivorous browsing for leaves, flowers, fruits and tubers, they will also eat insects, frogs, small birds and mammals and even carrion. As long as they have vegetation to eat (from which they get some water), they can go without drinking for very long periods. In the rainy season they will frequently not drink water at all, instead obtaining fluids from fruits. They will often scavenge for these fruits below trees in which monkeys are feeding. They are active both day and night but become more nocturnal near human settlements. Males are territorial and smear gland secretions on rocks and branches in order to mark their territories; their preferred resting places are generally on elevated ground where they can observe their territory. Females, by contrast, prefer deeper cover. The overall success of this species stems from its ability to inhabit a wide variety of habitats as well as from its adaptable, generalist diet.