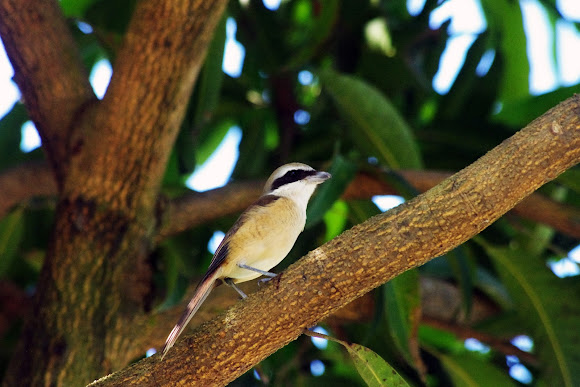 From Wikipedia, the free encyclopedia: The brown shrike (Lanius cristatus) is a bird in the shrike family that is found mainly in Asia. It is closely related to the red-backed shrike (L. collurio) and isabelline shrike (L. isabellinus). The genus name, Lanius, is derived from the Latin word for "butcher", and some shrikes are also known as "butcher birds" because of their feeding habits. The specific cristatus is Latin for "crested", used in a broader sense than in English.[2] The common English name "shrike" is from Old English scríc, "shriek", referring to the shrill call.[3] Like most other shrikes, it has a distinctive black "bandit-mask" through the eye and is found mainly in open scrub habitats, where it perches on the tops of thorny bushes in search of prey. Several populations of this widespread species form distinctive subspecies which breed in temperate Asia and migrate to their winter quarters in tropical Asia. They are sometimes found as vagrants in Europe and North America.

Spotted near a ricefield in Gerona, Tarlac Province, Philippines.

Thanks again to Paul Davis for identifying this.

Paul Davis a year ago

This is the sub-species Lanius cristatus lucionensis , sometimes called the Phillippines Shrike.

Hello Almario and Welcome to the Project Noah community!
We hope you like the website as much as we do. There are many aspects to the site and community. The best way to get started is to read the FAQs at http://www.projectnoah.org/faq where you can find all the tips, advice and "rules" of Project Noah. You, like the rest of the community, will be able to suggest IDs for species that you know (but that have not been identified), and make useful or encouraging comments on other users' spottings (and they on yours).
There are also "missions" you can join and add spottings to. See http://www.projectnoah.org/missions . A mission you should join is the https://www.projectnoah.org/missions/219... to chose the "best wildlife photo of 2019",only the spottings added to that mission are eligible.Note that most missions are "local". Be sure not to add a spotting to a mission that was outside of mission boundaries or theme :) Each mission has a map you may consult showing its range. We also maintain a blog archive http://blog.projectnoah.org/ where we have posted previous articles from specialists from different geographical areas and categories of spottings, as well as wildlife "adventures".
So enjoy yourself, share, communicate, learn. See you around :)