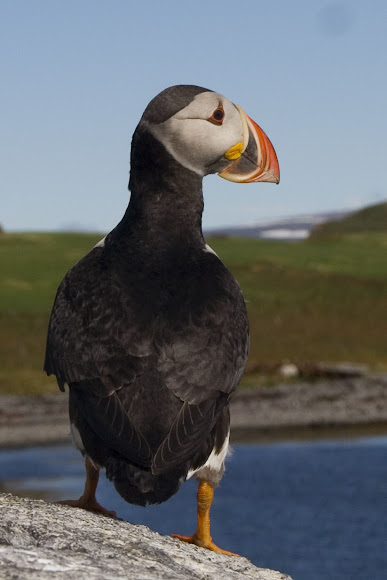 Puffins have predominantly black or black and white plumage, a stocky build, and large beaks. They shed the colourful outer parts of their bills after the breeding season, leaving a smaller and duller beak. Their short wings are adapted for swimming with a flying technique under water. In the air, they beat their wings rapidly (up to 400 times per minute) in swift flight, often flying low over the ocean's surface. 32 cm in length, with a 53 cm wingspan, weight 380 g.

Taken in the island of Vigur in the West Fjords of Iceland on a trip with Borea Adventures (www.boreaadventures.com).

They live very tough life... They are very cliffhangers..!!

One of my favourite birds, beautiful :)