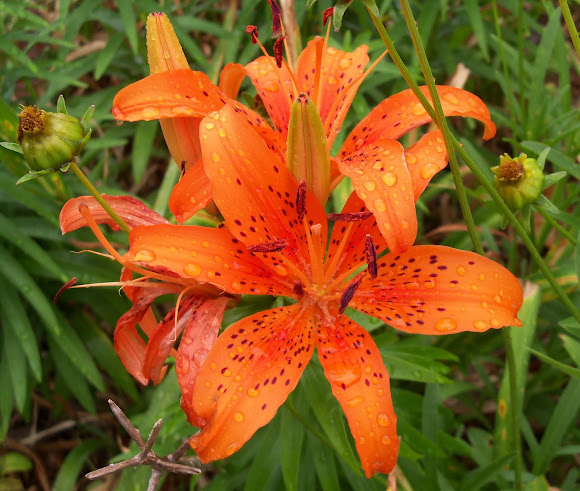 "The tiger lily has a tall, straight stem. They can grow to be eighty to two-hundred centimeters high. The leaves sprout from the single stalk and are usually long, narrow, and pointed. The flower petals are long and pointed, and come in groups of six. Being monocots, their petals come in sets of three, with two sets in the case of tiger lilies. A common mutation of tiger lilies causes them to produces flowers with large numbers of slightly thinner petals. Flowers are an orange or red-orange color with small black(usually) spots. They have fewer spots than other species of lily. The orange color combined with the black markings is what the name "tiger lily" is derived from. The stamens and the pistol, which are the male and female reproductive organs, are very long and pronounced. The tiger lily's petals will bend back very far during the flowering cycle, curling up against its own stem and exposing the stamens and pistol for pollinators."

"This species of tiger lily is native to eastern Guam, Japan, China, and Korea. It requires full, direct sunlight. It should be watered regularly and the soil kept moist. It does better with thorough periods of watering less often, than with light, frequent watering. It should be watered about once a week. Lilies are often found growing in ditches, where water collects in the soil, and are sometimes called Ditch Lilies because of it. These plants are fairly hardy and do well in cooler temperate climates, as well as warmer climates, as long as there is regular rain. They do well in almost any kind of soil. Home growers rarely need to use any fertilizer. "

Facts About The Tiger Lily Tiger Lily was first described by the famous Swedish botanist Carl von Linne (Linnaeus) in 1753. The Tiger Lily has significant medicinal use. A tincture is made from the fresh plant and has proved of great value in uterine-neuralgia, congestion and irritation, also in the nausea and vomiting of pregnancy. Tiger Lily flower essence helps in suppressing aggressive tendencies in individuals and helps in holistic healing. Tiger Lily can often act as a carrier of viral diseases and so becomes a vector infecting other species. It is therefore better to grow this species well away from your other lilies