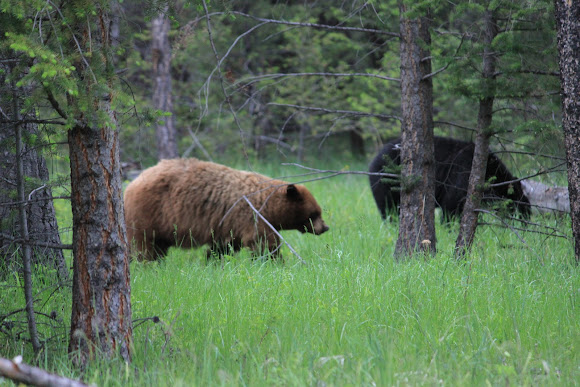 The American Black Bear, even though it has a singular color in its name it can still be others such as cinnamon brown, silver-blue, and, occasionally even white, the white bears are called Spirit Bears. The black Bear males weight on average is between 57-250kg (126-550lb.) while females on average weigh 33% less at 41-170kg (90-370lb.). Another species that share the same environment as the black bear is the white tailed deer. The white tailed deer is widely found throughout north america and is very common to see in the rockies, it has a white underside to its tail and the rest is golden brown the deer will lift up its tail if it senses danger. The Black Bear has a symbiotic relationship with Bear Lice, which is about 2mm long, the lice live on the surface of the bear and eat debris or dead skin and in return the bear gives them a place to live.This is called mutualism, because the worm gains a place to live and the bear is cleaned of dead skin and debris by the worm. This species is designed to be in its environment because it has a thick coat of fur to keep it warm from winter temperatures there coat is usually dark which helps in the forest when most things are shaded, the black bear can also climb trees very good as well as swim excellently. black bears use sexual reproduction, black bears reproduce by a male mating with a female, the fertilized eggs undergo delayed development and do not implant in the womb up to five months later, the gestation period lasts 235 days and the litters are usually born in late January to early February.

The Black Bear is very wide spread but is known to favor forested areas, preferably with an understory, they also may be found in mountains or swamps.Black Bears are very opportunistic omnivores there food consists of, grasses, corns, roots, nuts, berries, insects, fish, rodents, and deer fawns. Black Bears have no natural predator, other than time. Black Bears interact with their environment by eating usually only berries that are edible to them instead of meat even though they are omnivores, they also interact by finding holes/caves to hibernate in during the winter months.

The one in the left I would have thought it was a grizzly bear. I did not know black bears could also be brown. I only saw the black colored ones in US :-)