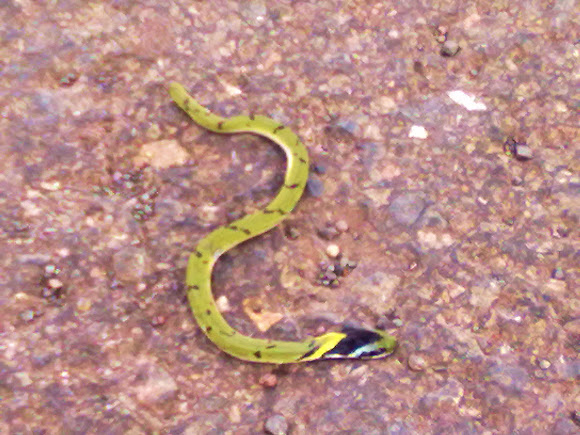 Stout and viper like in structure of body. Eye moderately large and the rostral scale is just visible from above. The suture between the internasals are as long as that between the prefrontals or a little shorter. The frontal scale is as long as its distance from the end of the snout or a little longer, as long as the parietals or a little shorter; the loreal scale is as long as deep or deeper, sometimes touching the eye; two preoculars scales and three or four postoculars; the temporals are 2 + 3 or 4; there are 7 scales on the upper lip (supralabials), the third and fourth touch the eye; 4 or 5 lower labials in contact with the anterior chin-shields, which are shorter than the posterior. The dorsal scales are strongly keeled, in 23 to 27 rows. The ventrals scutes are 144-160 in number and the anals are usually divided; the subcaudals scales are 35-50 in number. Dull green above, uniform or with traces of black markings. Young specimens show an inverted black V-mark on the neck, its apex forwards, reaching to the frontal shield, and a second much smaller one behind, the intervening space being bright yellow or orange; a black stripe from the eye to the angle of the month, and more or less regular transverse spots or cross-bars on the back and tail; belly whitish, yellow or plumbeous, rarely with darkish spots. In disposition the snake is very gentle and in threat may flatten the neck and raise the head like a cobra while other specimens may flatten the entire body on the ground. Feeds mainly on toads.

About 2 feet long when fully grown. Found in peninsular India and Sri Lanka especially on the hills rather than on the plains.

Yes! Thanks a lot.

The wikipedia page doesn't show an image of the actual markings of the green kneelback, here's a better picture:

Yeah! Even I have no knowledge of such reptiles being found in India. We have predominent species of king Cobra; but this one is one of its kind. I am looking for further details...will post as soon as I find. Thanks Emma!

Unique! What kind of snake could it be?
Welcome to Project Noah!