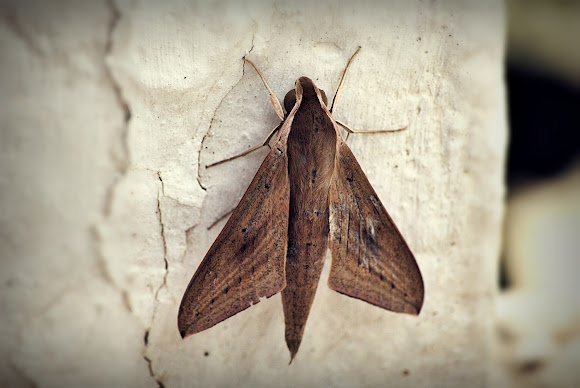 Sphingidae is a family of moths (Lepidoptera), commonly known as hawk moths, sphinx moths and hornworms, that includes about 1,200 species (Grimaldi & Engel, 2005). It is best represented in the tropics but there are species in every region (Scoble, 1995). They are moderate to large in size and are distinguished among moths for their rapid, sustained flying ability (Scoble, 1995). The narrow wings and streamlined abdomen are adaptations for rapid flight. Some hawk moths, like the hummingbird hawk moth, hover in midair while they feed on nectar from flowers and are sometimes mistaken for hummingbirds. This hovering capability has evolved only three times in nectar feeders: in hummingbirds, certain bats, and these sphingids (Kitching, 2002) (an example of convergent evolution). Sphingids have been much studied for their flying ability, especially their ability to move rapidly from side to side while hovering, called 'swing-hovering.' It is thought that this evolved to deal with ambush predators that lie in wait in flowers (Kitching, 2002). Sphingids are some of the fastest flying insects, some are capable of flying at over 50 km/h (30 miles per hour). They have a wingspan of 35-150 mm.

Its a Sphingidae moth