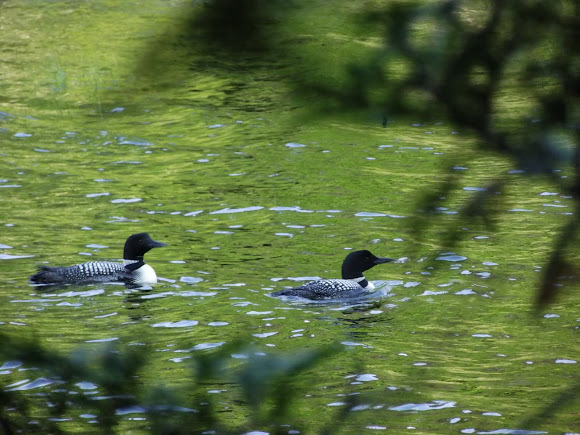 Adults can range from 61–100 cm (24–40 inches) in length with a 122–152 cm (4–5-foot) wingspan, slightly smaller than the similar Yellow-billed Loon (or "White-billed Diver"). The weight can vary from 1.6 to 8 kg (3.6 to 17.6 lbs). On average a Great Northern Diver is about 81 cm (32 inches) long, has a wingspan of 136 cm (54 inches), and weighs about 4.1 kg (9 lbs). Breeding adults have a black head, white underparts, and a checkered black-and-white mantle. Non-breeding plumage is brownish, with the chin and foreneck white. The bill is black-blue and held horizontally. The bill colour and angle distinguish this species from the similar Yellow-billed Loon.

The Great Northern Loon breeds in Canada, parts of the northern United States, Greenland, and Alaska. There is a smaller population (ca. 3,000 pairs) in Iceland. On isolated occasions they have bred in the far north of Scotland. The female lays 1 to 3 eggs on a hollowed-out mound of dirt and vegetation very close to water. Both parents build the nest, sit on the egg or eggs, and feed the young. This species winters on sea coasts or on large lakes over a much wider range in Europe and the British Isles as well as in North America.

These birds have disappeared from some lakes in eastern North America due to the effects of acid rain and pollution, as well as lead poisoning from fishing sinkers and mercury contamination from industrial waste. Artificial floating nesting platforms have been provided for loons in some lakes to reduce the impact of changing water levels due to dams and other human activities.

The most beautiful call of the wild. My favorite Canadian bird, the loon will always hold a place dear go my heart. Thank you so much for this :)