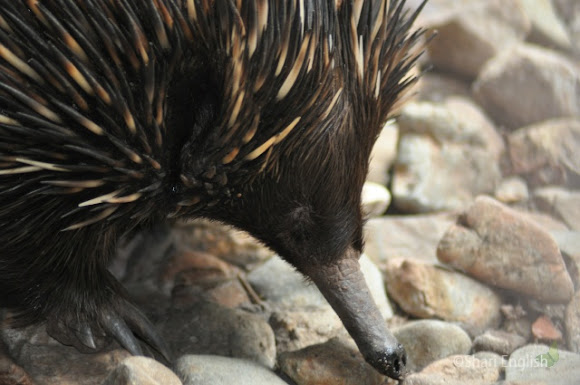 The Short-Beaked Echidna belongs to the class of mammal known as a monotreme, an egg laying mammal. The have a dark brown fur which is hidden by their long quills that function to protect them from predators. Their tubular snout contains a long tongue use to probe for ants and termites. Like their relatives the platypus, they males have a spur on the inside of the back ankle but unlike the platypus it is non-functional. They are very strong and exceptionally good diggers. When threatened they will curl up in a ball and bury themselves. Echidna mothers carry their young by tightening muscular flaps on their underside and feed young by secreting milk which the baby then laps. Most active around dusk and dawn. Commonly confused with porcupines or hedgehogs, neither of which are found in Australia however.

Lives in a large variety of habitats from forests to deserts. Can be found Australia wide.

This Echidna was spotted at Australia Zoo on the Sunshine Coast.