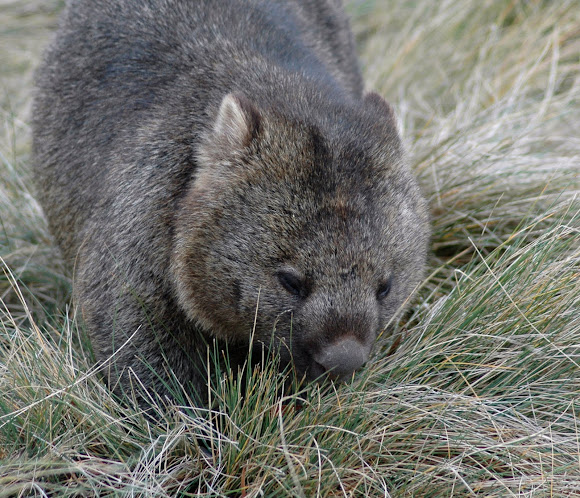 Common wombats are sturdy and built close to the ground. When fully grown they can reach anywhere between 80 and 130cm, and between 17 and 40kg.

It is widespread in the cooler and better watered parts of southern and eastern Australia, including Tasmania, and in mountain districts as far north as the south of Queensland, but is declining in Western Victoria and South Australia.

This one was grazing in the bunch grass only a few hundred meters from the visitor center at Cradle Mountain National Park. It was clearly un-concerned about people taking photos.

That's ok, I knew it was just a little mistake =) You must be thinking about wallabies too much!

Oops, dyslexia strikes again. That and I'm still tired from walking followed by two days of working in Latrobe (my work takes me around the state).

Obviously there is nothing "common" about these exceptionally cute animals, but alas I 'm obliged to use the name. ;)

I think you made a mistake in the title. What a cute chubby faced wombat!