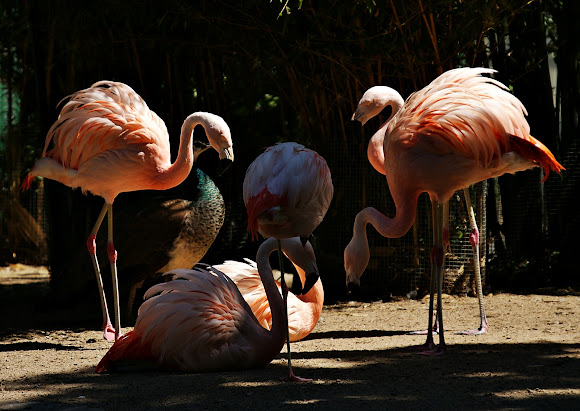 This is the largest species of flamingo, averaging 110–150 cm (43–60 in) tall and weighing 2–4 kg (4.4–8.8 lbs). The largest male flamingoes have been recorded at up to 187 cm (74 in) tall and 4.5 kg (10 lbs).[2] It is closely related to the American Flamingo and Chilean Flamingo, with which it has sometimes been considered conspecific, but that treatment is now widely seen (e.g., by the American and British Ornithologists' Union) as incorrect and based on a lack of evidence. Like all flamingos, this species lays a single chalky-white egg on a mud mound. Most of the plumage is pinkish-white, but the wing coverts are red and the primary and secondary flight feathers are black. The bill is pink with a restricted black tip, and the legs are entirely pink. The call is a goose-like honking.

The Greater Flamingo (Phoenicopterus roseus) is the most widespread species of the flamingo family. It is found in parts of Africa, southern Asia (coastal regions of Pakistan and India), and southern Europe (including Spain, Sardinia, Albania, Turkey, Greece, Cyprus, Portugal, and the Camargue region of France). The bird resides in mudflats and shallow coastal lagoons with salt water. Using its feet the bird stir up the mud, then sucks water through its bill and filters out small shrimp, seeds, blue-green algae, microscopic organisms and mollusks.