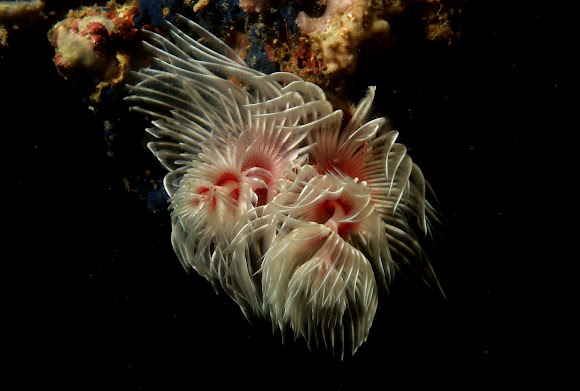 Sabellidae (feather duster worms) are sedentary marine polychaete tube worms where the head is mostly concealed by feathery branchiae. They build tubes out of parchment, sand, and bits of shell. Glomerula secretes a tube of calcium carbonate. They tend to be common in the intertidal zones around the world. Their oldest fossils are known from the Early Jurassic. Feather-duster worms have a crown of feeding appendages or radioles in two fan-shaped clusters projecting from their tubes when under water. Each radiole has paired side branches making a two-edged comb for filter feeding. Most species have a narrow collar below the head. The body segments are smooth and lack parapodia. The usually eight thoracic segments bear capilliaries dorsally and hooked chaetae (bristles) ventrally. The abdominal segments are similar, but with the position of the capilliaries and chaetae reversed. The posterior few abdominal segments may form a spoon-shaped hollow on the ventral side. Size varies between tiny and over 10 cm (2.5 in) long. Some small species can bend over and extend their tentacles to the sea floor to collect detritus.

When approached, they will retracts their 'feathers' and will slowly sneak out after a few minutes. Pic #4 shows close-up of the 'feathers' with the filament to filter feed.