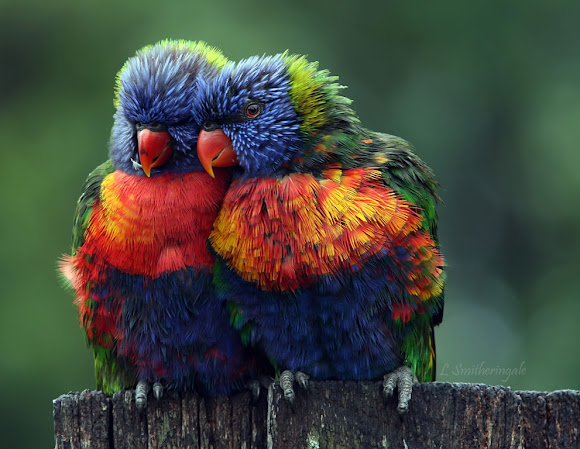 This pair of rainbow lorkeets were getting cosy on a rainy afternoon in my garden.

Rainforests, city parks and gardens in the Greater Brisbane region.

These birds often visit my garden and I have included a video of a courting pair. The video is not high quality as it was a rare moment of grabbing whatever I could put my hands on to quickly record the action. The female does not seem the least bit interested and she gives a whole new meaning to kick boxing! The male lorikeet is hilarious as he struts his stuff!

They actually are trichoglossus haematodus, is a pecies of parrot found in Australia. It is common along the eastern seaboard, from northern Queensland to South Australia and Tasmania. Its habitat is rainforest, coastal bush and woodland areas. Several taxa traditionally listed as subspecies of the rainbow lorikeet are now treated as separate species. They are so cute!

This video never ceases to amuse!

I love the colors! Beautiful!

Rainbow Lorikeets are the F1-11 fighter planes of the birds. Super fast with crazy manoeuvres. Must be all that sweet nectar.

Your spotting got posted (attributed to you) on Frans de Waal's fb page https://www.facebook.com/pages/Frans-de-...

That is an amazing photo well done

Wow! These birds colors are in-describable :)

There are a lot of colors in this bird!

and 773 other people favorited this spotting