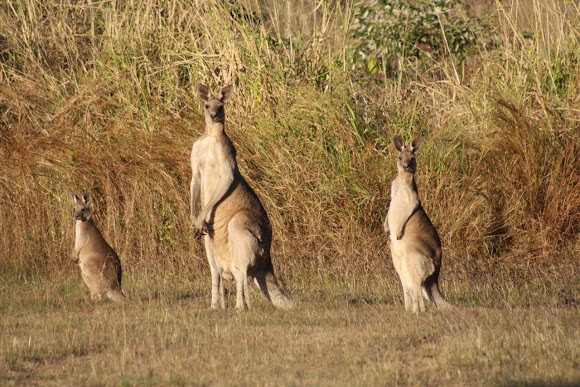 A Eastern Grey Kangaroo has a small head with big ears. Its tail can grow up to 4feet long which is very is very helpful for balancing and when standing up straight. They are very powerful jumpers. It has Life span up to 18-20 years.

Eastern Grey Kangaroos are herbivores, the main things that they eat are shrubs, leaves, grass, and herbs. They feed mainly at night and in the early morning. During the day they lie under shaded trees or in holes they have dug.

Eastern Grey Kangaroos live in mobs. A mob is led by a mature male and consists of young males and female with their young the older male stay in control through the force. The Eastern Grey kangaroo live on the grassland and open wood land of eastern Australia and Tasmania. As well as forested coastal areas of Eastern and South Eastern Australia.

Such a good photo!

You had their complete attention!