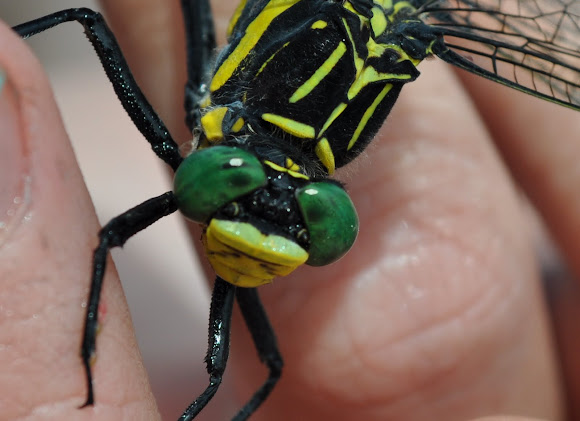 The largest North American clubtail, at 3.3 inches (84 mm), with black and yellow markings and green eyes. Males can be distinguished at a distance by their habit of curling their abdomens under while flying, forming a sideways J shape.

a clubtail dragonfly of the eastern United States and southeastern Canada. The nymph is unusual, with a very flat, wide body. It is slow-moving and lives among bark and leaf litter at the edges of streams, where its dark color provides camouflage. The adult feeds on large insects, including darner and clubtail dragonflies, sometimes ambushing them from above. It also takes Monarch butterflies, eating the thorax and abdomen first to avoid the greatest concentration of cardenolide toxins.

We rescued this from the lake

Thanks ReannaDee- they are gorgeous arent they?

It has the most beautiful green eyes. =) Great pics!!

Thanks Nicholas. we rescued it from the lake so it was drying off on our hands. One of my students held it while I took its photo.

Very nice shot! Were you holding it, or was it someone else?? Bugs and insects do not sit tight easy!
Nick

It is a beautiful spotting, Congratulations!!!

Thanks for your input- I will remove the third picture and submit it separately. Any ideas? It was in the water

impressive dragonfly, but I think the third picture doesn´t belong there- doesn´t look like a dragonfly nymph at all.

Beautiful details and spotting !! The green is gorgeous. the two shades of green compliment each other perfectly!