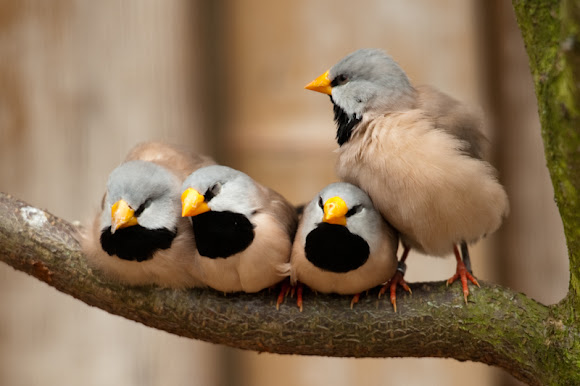 The Long-tailed Finch (Poephila acuticauda) is a common species of estrildid finch found in Australia; also known as the Blackheart Finch, Shaft-tail Finch, Heck's Grassfinch, Heck's Grass Finch, and Heck's Finch. It is a predominantly fawn-coloured bird with a pale grey head and prominent black bib and eyes. It has an estimated global extent of occurrence of 1,000,000–10,000,000 km². It inhabits dry savanna habitats in Australia. The status of the species is evaluated as Least Concern, and adapts readily to aviculture.

They are great, right @MicheleMorbidelli and @Ali Hemati Pour

Such a lovely series!

and 206 other people favorited this spotting