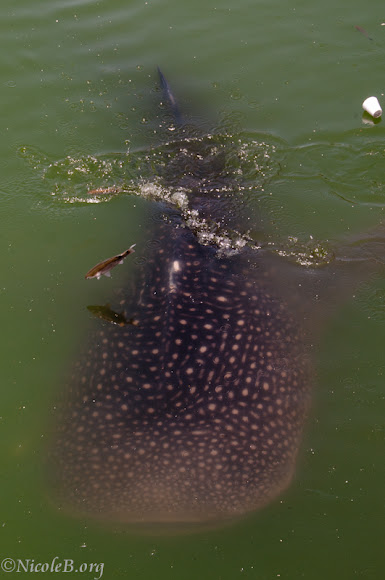 Not a common sighting for Kuwait. This young female whale shark was trapped in the marina in Kuwait for 2 days, rescue efforts were on their way, but she made it out by herself. Conservation status: vulnerable

During the time she was there she was much admired, but some weirdos also threw trash and worse things at her. One guy tried to harpoon her. He was an employee at the marina and was instantly fired.

Thanks all for the Infos and the correction about the category!

Have been offline for a while :-)

auntnance I think you are right whale sharks (sharks in general?) do give birth to live young. So it is warm bloodedness, feeding milk to young, breathing at the surface and having lungs not gills that are characteristics that whales (all mammals) have and a sharks don't. Ooops Heather already said it all.

Aunt Nance, I don't know if all sharks give birth to live young but whale sharks do. They also apparently eat in the vertical position in the wild, and for the GA quarium's purposes, they had to be retrained to eat in a more horizontal position because the exhibit was not deep enough for a vertical feeding habit. In that same exhibit they have 2 types of stingrays (that I know of) and a bunch of different sharks and other fish. The sharks are so different looking and behaving, it's amazing to me that they are related.

I was asking because I was (mistakenly) under the impression that like all sting rays, that all sharks give birth to live young.

http://www.georgiaaquarium.org/animalgui...
The live birth requirements for mammals is only part of the criteria that has to be met to be classified as a mammal. Think of mamma in this context: Whales (and cows and humans) give birth to one baby (occasionally two) at a time and nurse them with mother's milk. Dogs and kittens reproduce several babies at a time and nurse all of them using mother's milk. No mammal produces 300 young at a time. There is also the warm-blooded, bones, and hair requirements, too. I am channeling science classes here. I am no expert. :-P

Thanks, Nicole for sharing this wonderful animal.

There are some of these at the Georgia Aquarium. They are not whales, and thus not mammals. People call them whales because they are big like whales and this particular shark feeds like a whale that uses baleen or filter feeding. The females produce up to 300 live young at a time, but they are sharks and the young are incubated inside the mother until live birth. At 300 live births a year, there is obviously a high mortality rate. Other sharks do this type of overproduction, too. Their bones are cartilage and mammals bones are bone. They have gills not lungs. The scientists who track these whale sharks are able to ID them from their spot patterns, and size. In the Philippines, they are caught by fishermen and used as a human food source after being sold at a fish market.

When the GA Aquarium wanted some, they basically put out word at the fish markets that they wanted one and they'd pay higher than the fish market. Plus they had to be the right size and they were kept in a sea pen and trained to eat from color-coded cups on huge poles. UPS outfitted a plane to ship it from the Philippines to Atlanta, GA. It was quite an undertaking.

Gale, do I misunderstand about the live birth issue?
•Ovoviviparity - In these sharks, the eggs hatch and the babies develop inside the female's body.

In 1995, an 11-meter female whale shark was harpooned off the eastern coast of Taiwan and 300 fetal specimens, ranging in length from 42 to 63cm, were taken from the two uteri. This discovery proved that the species is a livebearer, with an ovoviviparous mode of development. Whale Sharks have never been seen mating or giving birth. Males have Claspers, which are inserted into the female

great spotting! thanks for sharing!

Nichole so glad it had a good ending and some people were impressed and willing to protect her.

In spite of her name "whale shark" they are actually not mammals: they breathe underwater through gills, do not bear live young, are not warmblooded and do not feed their young milk. Their name is confusing indeed.

Thanks, Harsha!
I was impressed that for once action was taken asap.

Great story! Good to hear that she is safe and the poacher was punished.

@SatyenMehta
Yes, unbelievable :/
Maybe they though she would get mad and jump or play 'wild shark' - sigh :/

@madasamarinebiologist
Good Luck for a big one :D

@Dan
Yup, I liked that too :D
They were feeding on the bread that some smart people had thrown in and she plowed over them ;)

That's neat that you caught the other small fish jumping out of the water too.

Nice spotting. Sad thing that people were throwing litter on her.

great nicole lucky to spot this one

Yes, Mick, very true! I wish it were otherwise and more people would walk around with their eyes and minds open.
:(

Daniele, it was. I was lucky to hear about it and get there with a friend.
Some group wanted to tag her, but they didn't raise enough money fast enough to get the tag and she left to freedom without a monitoring system.
As far as I know, there isn't much know about the movement of these big fellows in the Arab Gulf.
2 or 3 got trapped in the last few years.