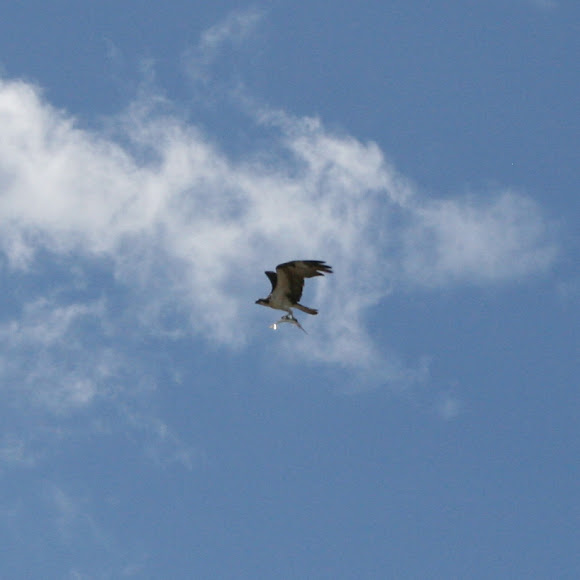 Ospreys are 0.9–2.1 kilograms (2.0–4.6 lb) in weight and 50–66 centimeters (20–26 in) long with a wingspan of 127–180 centimeters (4.2–6 ft). The upper parts of their wings are deep, glossy brown, while the underparts of the wings are pure white. Their wings have four long, finger-like feathers and a shorter fifth that give it a distinct appearance. Their breast is white and sometimes streaked with brown. Ospreys have a white head, which has a dark mask across the eyes, that are golden to brown. Their bill is black, their feet are white with black talons. In flight, Ospreys have a characteristic bend in their wings (drooping 'hands'), similar to gulls. Their vision allows them to detect underwater objects from the air. Their diet consists 99% of fish, but they also hunt for rabbits, hares, amphibians, other birds, and small reptiles.

The Osprey can be found worldwide (except Antarctica) in temperate and tropical regions of all continents.

@ pesayo Thanks, I wasn't really sure because of its silhouette, but the clues you gave actually help me identify it. Thanks a lot for the help and the compliments! :-D

Osprey have a characteristic bend in their wings while flying (similar to gulls). Also white under the wing on the leading edge and black on the trailing edge are clues. Another nice clue is it's carrying a fish, by far its favorite food. Nice catch on its part and yours!

It's good that you were lucky! Brilliant spotting, though I have no idea about the ID. Sorry.

yes, I was on the beach and watched him circling in the air looking for food. It was perfect timing, I just had enough time to get the camera out. Luckily it was on auto focus :-)

Brilliant photo! Is it carrying something?