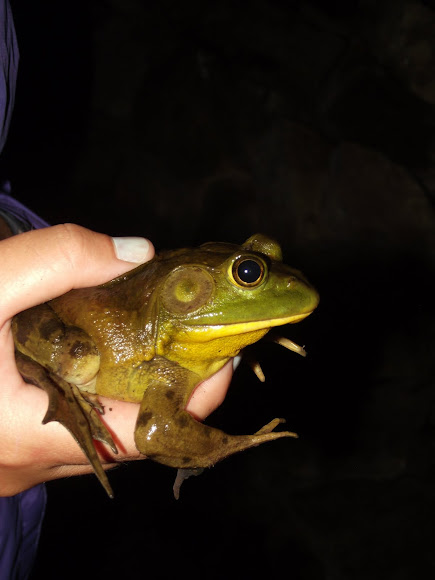 Bullfrogs grow on average to be about 3.5 to 6.0 inches (9–15 cm) in body length (although there are records of some up to 8.0 inches), legs add another 7–10 inches (17–25 cm) to length. The adult bullfrog skeleton is representative of tetrapod vertebrates, comprising an axial skeleton (skull and vertebrae) and an appendicular skeleton (pectoral girdle and forelimbs, pelvic girdle and hindlimbs). Ranids, however, lack ribs. The pronounced pair of dorsal humps in the back of ranid frogs are the ends of the pelvic ilia, homologues of the human hips. The bullfrog skull is highly fenestrated. The orbits open ventrally through the roof of the mouth to accommodate eye retraction during locomotion and swallowing. The skull bears a continuous row of tiny teeth on the maxilla and premaxilla and a pair of small vomerine teeth on the palate. The mandible is toothless. The bullfrog nervous system consists of a brain, spinal cord, and peripheral nerves, including cranial, spinal, and sympathetic nerves serving organs, such as the heart, gastrointestinal tract, kidneys, and gonads. Females have eardrums (tympana) the same size as their eyes. Males' eardrums are larger.

This is a frog of larger, permanent water bodies, swamps, ponds, and lakes, where it is usually found along the water's edge

While occasionally kept as pets, the American bullfrog provides a food source, especially in the Southern United States and in some areas of the Midwestern United States. In a few locations, they are commercially cultured in ponds, but the traditional way of hunting them is to paddle or pole silently by canoe or flatboat in streams or swamps at night; when the frog call is heard, a light is shone on the frog to temporarily inhibit it. The frog will not jump into deeper water as long as movement is slow and steady. When close enough, the frog is gigged and brought into the boat. In some states, breaking the skin while catching them is illegal, and either grasping gigs or hand capture are used. The only parts eaten are the rear legs, which resemble small chicken drumsticks and, sometimes, the backs, which are usually fried. The American bullfrog is also used as a specimen for dissection in many schools across the world. The American bullfrog is the state amphibian of Iowa, Missouri, and Oklahoma. The American bullfrog has been introduced to many countries in the world, such as South Korea, Western Europe, Brazil, Colombia and Australia, where it has become a nuisance to those countries' natural ecology because of its appetite. The American bullfrog has been widely introduced to most western states, and is now very common there, especially in California, and poses a serious threat to native species, such as the California red-legged frog because bullfrogs are aggressive and will eat anything smaller than themselves. They are considered a factor of the red-legged frogs' decline.