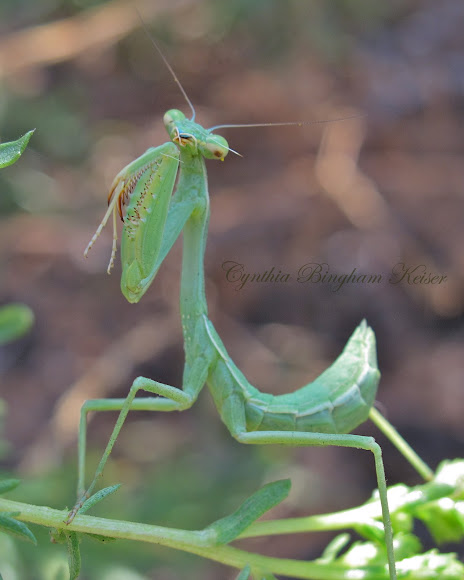 Green mantis with blue on end of mouth and orange on "arms". Mantis qualify for Wildlife with Super Senses because: "the articulation of the head is also remarkably flexible, permitting nearly 300 degrees of movement in some species, allowing for a great range of vision (their compound eyes may contain up to 10,000 ommatidia and have a large binocular field of vision). The dark spot on each eye is a pseudopupil. As their hunting relies heavily on vision, they are primarily diurnal, but many species will fly at night, especially males in search of less-mobile females whom they can detect through pheromones. Flying at night allows these males to avoid many diurnal bird predators, and many mantises also have an auditory thoracic organ that assists them as they attempt to avoid capture by bats by detecting the presence of the bat's echolocation sounds and responding evasively." - Wikipedia

On currently unknown plant http://www.projectnoah.org/spottings/695... near a hiking trail.

This mantis has a hair and some yellow flower stuck on its eye. I really wanted to get it off but I think it wouldn't appreciate it :)

Ronald and Amissa 10 years ago

I'm not convinced it's S. californica. We also have S. limbata here and that one was confirmed by BugGuide in another of my spottings.

Welcome Cindy..
Please update ID...
Google Chrome is very helpful for me to find anything related to Project Noah and my office work...!!

Hi Ashish, thank you :) You're most likely correct on the ID. I submitted some of these pics as well as my other Mantis spottings to BugGuide and for some reason, they could only narrow down the genus.

Thank you Carol and Mayra!

Thank you Emma. I hope to gain as much knowledge as you when I get 1000 spottings :) Ronald and Amissa have a few video's. My latest favorites are the Moth at http://www.projectnoah.org/spottings/712... and a recent spotting of the California Broad-necked Darkling Beetle. Happy spottings!

Cindy , I became a Ranger last week. Thanks so much for your wishes.
Project Noah is very fortunate to have spotters like you.
BTW Have Ronald and Amissa produced a video?Would like to see that.
i agree that the praying Mantis is adorable and photogenic.

Thank you Emma and Ivan! They are very photogenic insects and thought I'd spice up the video a bit. Emma, when did you become a Ranger? Congratulations!!!! Very well deserved.

Extremely well done! Your hard work is clearly shown by these shots and the video. Definitely keep up the amazingness!

:) Thanks Emma. I was trying to make it a little more entertaining although nothing near those from Ronald and Amissa!

I found another Ca Mantis although I believe it's a male. I made a video that was inspired by Ronald and Amissa's great video humor. Enjoy

I think she must be a professional model :)

@Ronald and Amissa, I believe it's a female California Mantis (now that I looked it up after your suggestion) based on its location and markings. Your species suggestion isn't found here according to the site you provided although they look similar. Thank you for helping though. I think she WAS posing :)

I love this species too! I was very excited to find it since I've been looking all summer :)

Ronald and Amissa 10 years ago

That first picture looks like he's posing for you lol

Its awesome how no matter where you move with these guys for a different angle when you look back at the pix, they were watching you the whole time. One of my fav. species. And very helpful w/ the bugs.

Thank you Ashish :) I try to get a 360 degree view of all my spottings whenever possible.