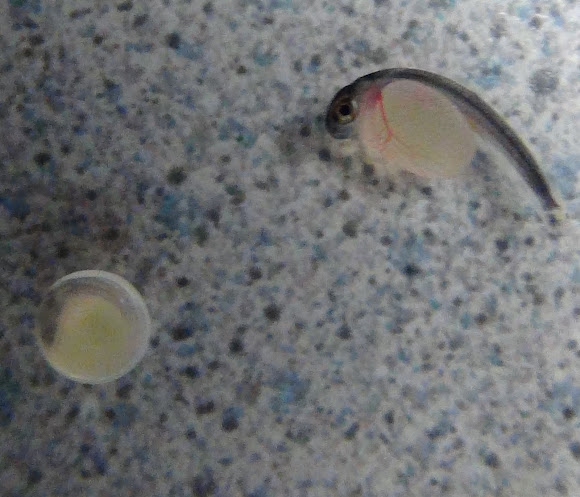 This species is green to brown in basic colour, with a distinctive marbled pattern (called vermiculations) of lighter shades across the flanks and back and extending at least to the dorsal fin, and often to the tail. A distinctive sprinkling of red dots, surrounded by blue haloes, occur along the flanks. The belly and lower fins are reddish in color, the latter with white leading edges. Often, the belly, particularly of the males, becomes very red or orange when the fish are spawning. The species reaches a maximum recorded length of 86 cm (33 in) and a maximum recorded weight of 6.6 kg (14.5 lb). It can reach at least seven years of age, with reports of 15 year old specimens observed in California habitats to which the species has been introduced. Typical lengths vary from 25 to 65 cm (10 to 26 in), and weights vary from 0.3 to 3.0 kg (0.7 to 7.0 lb). Growth rates are dependent on season, age, water and ambient air temperatures, and flow rates. In general flow rates affect the rate of change in the relationship between temperature and growth rate. For example in spring growth increased with temperature at a faster rate with high flow rates than with low flow rates.[6]

The brook trout inhabits small streams, creeks, lakes, and spring ponds. Some brook trout, referred to as sea-run brook trout, are anadromous. One study showed that sea-run brook trout were longer, heavier, and had higher carbon to nitrogen ratios (indicator of carbon content) than equivalent resident trout. This relationship shows that offspring of sea-run trout could have potential adaptive advantages over resident offspring [2] Brook trout are native to a wide area of eastern North America, but increasingly confined to higher elevations southward in the Appalachian Mountains to northern Georgia, Canada from the Hudson Bay basin east, the Great Lakes–Saint Lawrence system, and the upper Mississippi River drainage as far west as eastern Iowa.[3] The typical pH range of brook trout waters is 5.0 to 7.5, with pH extremes of 3.5 to 9.8 possible.[4] Water temperatures typically range from 34 to 72 °F (1 to 22 °C). Warm summer temperatures and low flow rates are stressful on brook trout populations—especially larger fish. This trend shows a connection between season-specific survival and future problems associated with climate change.[5]

This is an alevin and egg picture taken today in my classroom as part of our Trout in the Classroom project.