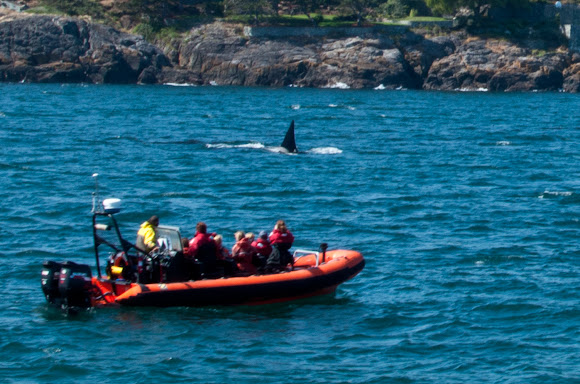 Not a true whale, the Killer Whale is the largest member of the Dolphin family. This particular individual is known as T14 and Pender. His designation "T" is because he is what is known as a transient and not a member of the any of the three resident pods in the Puget Sound region. In March 1976 Pender and his mother Flores were captured along with a number of other orcas. Due to public complaints, most were released, but Flores and Pender were kept for scientific purposes. Both were sent to Seattle Marine Aquarium where they were radio-tagged after 55 days, and then released. Male Orcas stay with their mothers all of their lives, and Pender stayed with his until she died sometime around1998 or 1999. Orcas have a long lifespan, A live member of the Southern Resident J pod "Granny" is 100 years old! Pender is believed to have been born in 1964, making him middle aged at 47. One striking difference between the Resident and Transient Orcas is their Diet. resident Pacific Northwest Whales are Fish Eaters, The transients do not eat fish, they eat marine and land mammals.

The Pacific Ocean and inland waters British Columbia and the Puget Sound of Washington.

Pender was spotted on a Whale Watching trip swimming just a few yards from the shore near a Golf course in Victoria, British Columbia, Canada. Pender was on a mission searching for a meal of Harbor Seal from one of the many small islets an islands that line the coast of Vancouver Island. He was successful and nabbed at least one while we watched.

Wow that was a big Mammal, 19 ft! I asked you cause it seemed strange to me having that size they are able to feel good or swim in only 10 ft deep waters, 10 ft is like nothing! Thanks for telling me :-)

It was amazing watching him hunting. Sometimes he was within inches of the shore as he patrolled. The captain of the Whale Watching boat said that the water at that point was less than 10 feet deep. This is a large Mammal, when he was released after his capture in 1976 we was over 19 ft long. His Dorsal fin is 6 feet tall!

That's cool you could capture it in a shot. It's strange they get till the bay of Victoria over there, it's not very far from open ocean but didn't think they can swim inside it, I rather thought they could swim along coast line without getting to close to bays. Very interesting anyway :-)