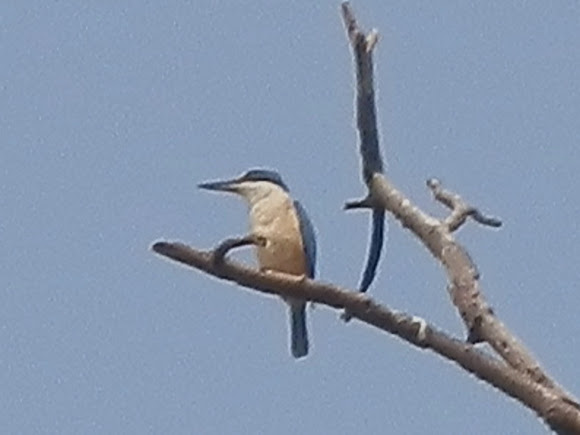 Sitting high up on a dead tree branch was a delightful kingfisher with a turquoise back, rump and tail. Throat was a gleaming white and belly a creamy colour. The back of the neck had a white collar. Pic3 shows it's partner which joined it a little later.

This spotting is for documentation of species, location and time only. The birds were so far away that clearer shots were not possible with my simple camera.
These birds, although called kingfishers, forage mostly on land feeding on small lizards, insects and crustaceans. They are found all along the coast of mainland Australia in woodland, among mangrove and paperbark trees. They fly north for winter and come down South to breed.
Order: Coraciformes
Family: Alcedinidae

I think you should post your photos Tukup. After all that's what this project is about. I don't have a fancy camera but it's good enough for documentation.

Thanks for sharing Leuba. It is a nice looking bird. I have some "less-than-stellar" photos that I've been hesitant to post, but like you, I'd like to have them included in the database for reference sake. I will continue to look for better ones, but in the meantime I think they should be added.