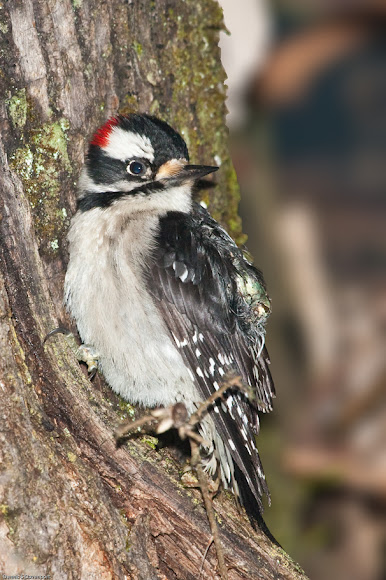 The Downy pictured has a passenger on its back. I didn't realize this when I was taking the pictures, but there is a Pacific Tree Frog riding on the back of this Downy Woodpecker. I was showing the shots on my monitor to my daughter and she spotted the bump on the bird's back and asked what that was. While shooting these shots, the bird did not act oddly nor did the added weight of the frog seem to affect its ability to fly. I was in my vehicle and the bird was right off the edge of the road on some type of foliage. It would fly back and forth between the foliage and this nearby tree trunk while I was shooting. I doubt I will see this phenomenon again! I first posted this series on Flickr in 2009. It has since received over 2270 views. If you are interested in reading the various comments it received, please visit my Flickr posting at: http://www.flickr.com/photos/dsdavenport...

Hi Dennis, just started a woodpecker mission and would love for you to add this one!
http://www.projectnoah.org/missions/1419...

Thank you all for the comments!

Odd! never seen something like this before. Nice sighting!

Lovely spotting Dennis, I guess you got the frog as a package deal. Really good work.

I've just been reading all the comments. It really is an amazing series of photos!

Some say the frog may have been trying to keep warm, others say it accidentally landed there and has sticky skin, making it hard to jump off. Check the Flickr link I gave to see more comments from folks. Thanks!

How bizarre! Has anyone come up with a suggestion for the frog's behavior?