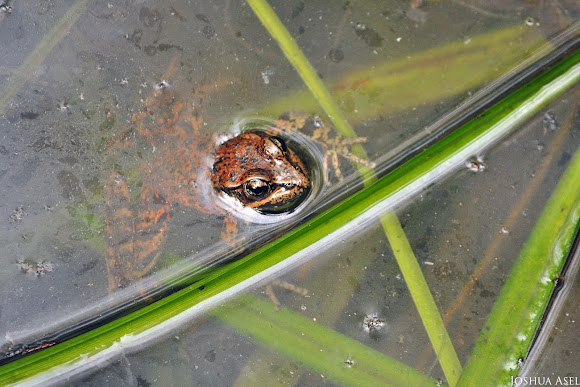 The California red-legged frog is a rare species of frog found almost exclusively in the state of California. It became famous for being the frog featured in Mark Twain's short story The Celebrated Jumping Frog of Calaveras County. Red-legged Frogs are a Threatened species protected under the Endangered Species Act. The main threats are non-native bullfrogs in California which eat many California red-legged frogs, habitat loss from homes, farms and buildings being built on their wetland habitats, and over-exploitation in the 19th and 20th Centuries when they were over harvested for food as well as their water resources being overused, depleting frogs of the water habitat they need for homes and breeding.

The frogs in these pictures are found between housing developments and a 146 acre golf course, which has been killing endangered frogs and snakes and costing the City's taxpayers money ever since, in Pacifica, CA. Thanks to biologist Michael G Starkey of Save The Frogs!.