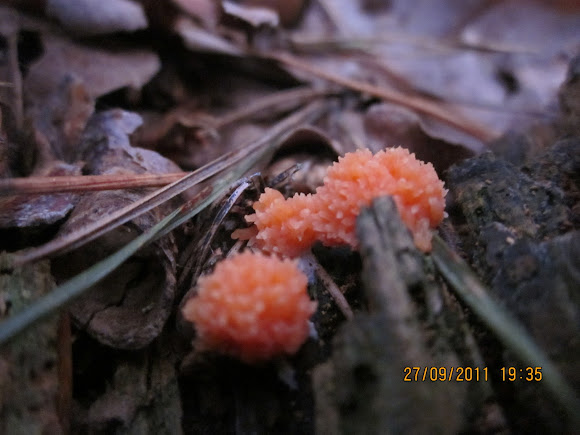 The individual reproductive organs are cylindrical, rounded or slightly flattened laterally. They are up to five millimeters high and 0.2 to 0.4 millimeters in diameter. They are joined close to Pseudoaethalien. These are spread out flat to hemispherical shape, and they are 60 has a diameter of 10 to sometimes even extend 100 millimeters. Emerge from the surface of individual rounded limbs (plasmodium !?----> ( http://www.projectnoah.org/spottings/755... )

The slime mold is found primarily on dead coniferous wood. Flying the type Epicypta testata lay their eggs in the plasmodium of the fungus. She lives as a larva and a nymph in the fruiting bodies and contributes to the spread of spores. The species is often found among others, like: Lycogala epidendrum, the milk-bonnet, Physarum nutans, Arcyria obvelata,Cribraria serpula and several species of the genus Hemtirichia

i had found him relativ late at the day, the light was fading. therefore i wanted to go the next day back, to get some better pictures. i definitly found the right spot back again but the slime mold wasn't there anymore. i know some mushrooms/molds are decaying very fast but you will mostly find at least some residu but one day later i found no little evidence of the mold. -- above, the pictures 4 shows the stem with mold and the next picture 5 (exact same stem) without it.!!! Probably is he eaten by slugs and snails! --- Slime mold or mould is a broad term describing protists that use spores to reproduce. Slime molds were formerly classified as fungi, but are no longer considered part of this kingdom. Their common name refers to part of some of these organisms' life cycles where they can appear as gelatinous "slime". This is mostly seen with the myxomycetes, which are the only macroscopic slime molds. Slime molds have been found all over the world and feed on microorganisms that live in any type of dead plant material. For this reason, these organisms are usually found in soil, lawns, and on the forest floor, commonly on deciduous logs. However, in tropical areas they are also common on inflorescences, fruits and in aerial situations (e.g., in the canopy of trees) and also grow in air conditioners, especially when the drain is blocked. In urban areas, they are found on mulch or even in the leaf mold in gutters. One of the most commonly encountered slime molds is the yellow Physarum polycephalum, found both in nature in forests in temperate zones, as well as in classrooms and laboratories. Most slime molds are smaller than a few centimeters, but some species may reach sizes of up to several square meters and masses of up to 30 grams. Many have striking colours such as yellow, brown and white