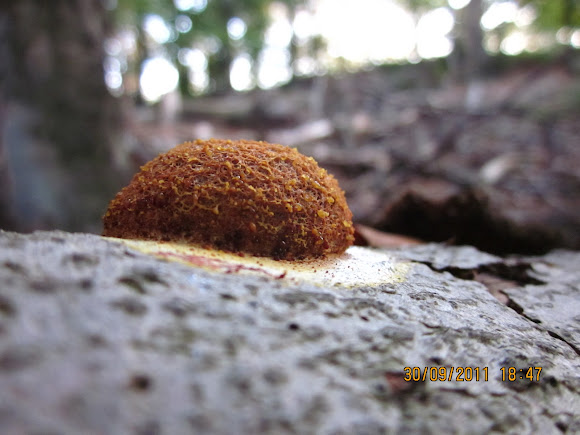 Fuligo is a genus of plasmodial slime mold. In Finland one unusually prominent species with a bright yellow plasmodium, Fuligo septimia, was believed to be used by witches to spoil their neighbor's milk. This gives it the name paranvoi, meaning butter of the familiar spirit.

The "Fuligo" is distributed worldwide. They colonized rotting wood, bark, rotting material in the litter horizons of forest soil and the soil itself are occasionally formed fruiting bodies on living plants, damage to the plants produced thereby is not. Sometimes, the plasmodium can also be found on lawns. Evidence exist for desert species. One of the specialized nature of the fungus in particular Aethalien higher latitudes, the ascomycete Nectriopsis violacea. Even moss mold beetle of the family of beetles (Lathridiidae) feed on the Aethalien, but also further spread the spores

The plasmodium is usually yellow, rarely white or cream. The usually solitary, rarely in small groups occurring fruiting bodies (Aethalien) have a diameter of 2 to 20 centimeters and a height of up to 3 inches. They are white on pale yellow, pale pink to red, dark red, brown, purple or green. The Hypothallus consists of one or more layers of colorless to brownish, perforated membrane that jut do not have the Aethalium. The outer skin of the Aethaliums (cortex) is relatively thick, chalky and fragile, or very rarely be absent, the membranous peridium is colorless and has scattered lime spots ------- Slime mold or mould is a broad term describing protists that use spores to reproduce. Slime molds were formerly classified as fungi, but are no longer considered part of this kingdom. Their common name refers to part of some of these organisms' life cycles where they can appear as gelatinous "slime". This is mostly seen with the myxomycetes, which are the only macroscopic slime molds. Slime molds have been found all over the world and feed on microorganisms that live in any type of dead plant material. For this reason, these organisms are usually found in soil, lawns, and on the forest floor, commonly on deciduous logs. However, in tropical areas they are also common on inflorescences, fruits and in aerial situations (e.g., in the canopy of trees) and also grow in air conditioners, especially when the drain is blocked. In urban areas, they are found on mulch or even in the leaf mold in gutters. One of the most commonly encountered slime molds is the yellow Physarum polycephalum, found both in nature in forests in temperate zones, as well as in classrooms and laboratories. Most slime molds are smaller than a few centimeters, but some species may reach sizes of up to several square meters and masses of up to 30 grams. Many have striking colours such as yellow, brown and white