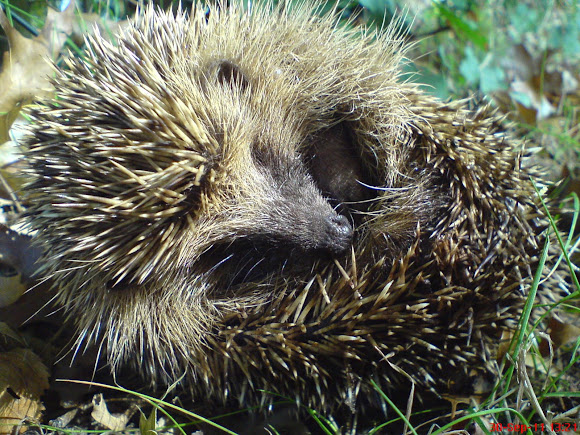 The European Hedgehog (Erinaceus europaeus), Common hedgehog or just Hedgehog in the Anglophone parts of Europe, is a hedgehog species found in northern and western Europe. It is about 20 to 30 cm in length. Adult mass typically ranges from 600 (after hibernation) to up to 1,200 g (prior to hibernation); occasionally, it may reach as much as 1,600 g. Males tend to be slightly longer and heavier than females.

The European Hedgehog lives in woodland, farmland and suburban areas. It is nocturnal, and if alarmed will roll itself into a ball, protecting itself against potential predators with its spines

i had found him on "mushroom hunt" , he was laying 30 cm away from the street. and wasn't much moving. I had take 2 sticks, with them i transported him away from the street to a hedge after wich a little forrest was. he had no visible wounds and maybe because he was frightend he just keept rolled. i think he was ill. he hadn't much energy. but that was the only thing i could do for him (sadly).

i hoped so , but he had crap behind him, even before i found him and was really energyless, even by going into defense-position. normaly i would go relativ fast but he maked big effort to get into position. fly around (not much to say, because hedgehogs can not do much personly cleaning), a big tik on the left side of his nek. i hope was well but i suspected he was ill, and surely he was cute!!

He is cute! I think you are right Marta!

May be he was OK and only faking to be half dead to discourage the potentisl predator :-)