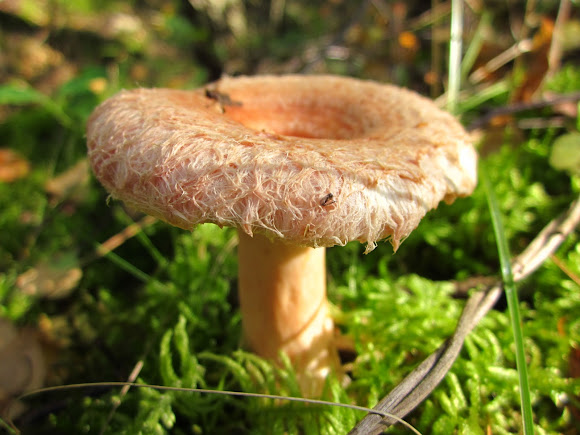 Lactarius torminosus, commonly known as the woolly milkcap or the bearded milkcap, is a large basidiomycete fungus in the genus Lactarius. It is found in the United Kingdom, Northern Europe, and is common in North America, where it grows in mixed forests in a mycorrhizal association with various trees, most commonly birch. Although it is valued for its peppery flavour and eaten after pickling in Russia and Finland, it is highly irritating to the digestive system when eaten raw. The toxins responsible for the acrid taste are destroyed by cooking. --The fruit bodies produced by the fungus have caps which can reach up to 10 cm (3.9 in) in diameter. They are pink-flesh coloured, with whitish concentric zones. The edge of the cap is rolled inwards, and shaggy when young. On the underside of the caps are flesh-colored gills crowded closely together. It is on these fertile gill surfaces that the spore-bearing cells, the basidia are found. The cylindrical stem is a pale flesh colour with a delicately downy surface, reaching lengths of up to 8 cm (3.1 in). When cut or injured, the fruit bodies ooze a white latex that does not change colour upon exposure to air. The variety normandensis, in contrast, has latex that changes colour from white to yellow

Lactarius torminosus is a mycorrhizal species, and it plays an important role in nutrient and water uptake by trees. It grows in association with birch (Betula) and hemlock (Tsuga) in mixed forests. It is also known to grow in urban settings where birch trees are nearby. Fruit bodies grow on the ground, scattered to grouped together. It is found throughout the United Kingdom, Northern Europe, and is common in North America, where it sometimes grows with aspen (Populus species). The North American distribution extends north into the Yukon and Alaska, and south to Mexico

Lactarius torminosus contains the lactarane-type sesquiterpene lactone 15-hydroxyblennin A. This sesquiterpenoid has a lactarane skeleton, similar to compounds found in other Lactarius species, such as Lactarius deliciosus, Lactarius blennius (blennin A), and Lactarius rufus (lactarorufin N, deoxydihydroketolactarorufin N). Fruit bodies contain a number of sterols, of which ergosterol is the predominant component at 60.5% (of total sterols), followed by the ergosterol derivatives ergost-7-en-3-ol (13.7%), ergosta-7-22-dien-3-ol (8.3%), and ergosta-5/7-dien-3-ol (17.0%).The mushrooms also contain the compound velleral, a breakdown product of stearyl-velutinal, which is contained within the lactifers—specialized hyphal cells that produced the mushroom's latex. It has been suggested that broken lactifers leak precursors whose breakdown products act as defensive agents toxic to humans and effectively deter certain vertebrates that might consume the mushroom. Velleral, which has an extremely pungent taste and is thought to be responsible for the toxicity of the raw mushroom, is present at a concentration of 0.16 mg/g mushroom

Henry14 a week ago

thanks , since the new camera, i find i have taken some good shot. before maybe too, but someone couldn't see that , because of the quality