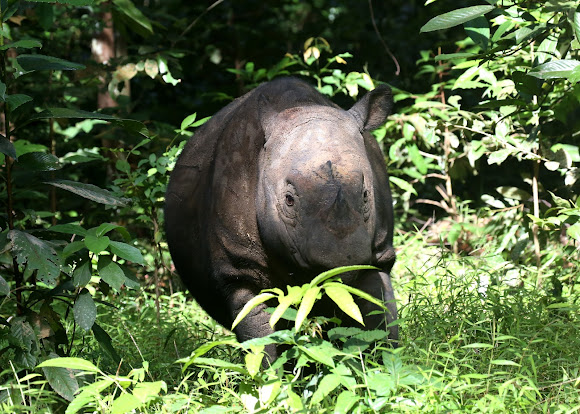 This is a small rhinoceros weighing in between 600 - 900kg, standing between 1 - 1.5m at the shoulder with a body length of between 2-3 meters. (Average of mature males and females). It is the only Asian Rhino to have two horns. 'Rhino horn is not medicine'. These are both relatively short with the front one measuring between 25-80 cm and the back one generally less than 10cm. Also known as the Hairy Rhinoceros, due to the sometimes dense coat of reddish hair covering its body. The one here is a 5yr old male.

In this case this rhino was seen in dense tropical lowland forest on the island of Sumatra in Indonesia. Once widespread, the decline in range and population has been tragic. Now only found in small fragmented populations in dense forest and usually under strict and rigorous management. A small population recently discovered in Kalimantan (North Borneo) but the only one captured subsequently died of a poachers snare wound. For this spotting exact coordinates and location have been modified to help protect this animal.

There are thought to be now less than 100 of these magnificent creatures left on earth. Small populations are managed in native forest at three sites in Sumatra all under armed guard. Several other breeding programmes have been tried in various places around the globe over the years but all have failed. The status of the animal is now critical with the breeding rate so low and the genetic diversity so small that bringing them back seems almost impossible. The work being done is incredible and I feel extremely privileged to have been able to see these animals there. Ref: International Rhino Foundation

Thank you The MnMs and Christine for you comments and support of this spotting.

Congratulations Rob! This is truly a magnificent and poignant spotting!

Wow! I am completely stoked to win this category with such a special creature. A big thank you to everyone who has commented and liked this spotting both here and Facebook/Twitter. I hope that the awareness of this animals plight will, in some small way help the growing number of species that find themselves in similar situations. Thank you again PN for being such a brilliant platform for us like minded people. Robert.

Congratulations on a well deserved accolade. They are awesome photos, requiring huge effort just to get to the right place! This should certainly help bring some more profile to these amazing creatures.

Wow, what a spotting! Congratulations!

Congratulations Robert, your Sumatran rhino is the winner of our 2017 Best Wildlife photo competition, Mammals category:

Thank you Christine for your comment and support of this spotting. Rob

This is an incredible spotting - my favorite from all of 2017.

Thank you for your comment Leuba. This was probably the most important spotting for me in 2017.

How did I miss this one. Thank you for sharing this wnderful spotting with us Rob. Waiting for the day when we hear the numbers have increased and they stay protected.

Thank you Mark, Liana and Rach for your comments.

Thank you Daniele and rangers for the SOTD. I really appreciate the support and air time PN can give these guys.

Congratulations on SOTD - very much deserved and a great opportunity to raise awareness of the work being done to save these ancient creatures.

Huge congratulations Rob! Very well deserved. Thank you for sharing the plight of this species in this incredible series.

Wow super spotting and shots although difficult to read re their numbers and prospects. Thanks Rob and congrats.

Congratulations Robert, this truly exceptional encounter is our Spotting of the Day. We are grateful that you're sharing these images here on Project Noah and raising awareness about critical issues regarding the conservation of these animals.

Awesome series Robert,congrats and thanks for sharing

Thank you Tanderra Farm. I can only assure you that from what I have seen, if this animal can be saved they are doing their upmost to achieve it. I am sorry but I don't have a Facebook page.

Thank you Christine for your comment. The second image I posted here kind of says it all :)

Thank you for sharing. What a beautiful animal. I hope it can be saved.

Incredible and also so heartbreaking. Thanks for sharing.