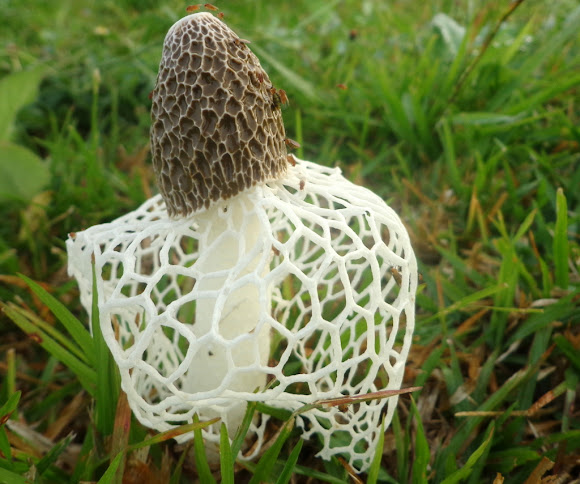 Phallus indusiatus, commonly called the bamboo fungus, bamboo pith, long net stinkhorn, crinoline stinkhorn or veiled lady, is a fungus in the family Phallaceae, or stinkhorns. It has a cosmopolitan distribution in tropical areas, and is found in southern Asia, Africa, the Americas, and Australia, where it grows in woodlands and gardens in rich soil and well-rotted woody material. The fruit body of the fungus is characterised by a conical to bell-shaped cap on a stalk and a delicate lacy "skirt", or indusium, that hangs from beneath the cap and reaches nearly to the ground.

Lawn in the middle of the road

According to ethnomycologist R. Gordon Wasson, P. indusiatus was consumed in Mexican divinatory ceremonies on account of its suggestive shape. On the other side of the globe, New Guinea natives consider the mushroom sacred. In Nigeria, the mushroom is one of several stinkhorns given the name Akufodewa by the Yoruba people. The name is derived from a combination of the Yoruba words ku ("die"), fun ("for"), ode ("hunter"), and wa ("search"), and refers to how the mushroom's stench can attract hunters who mistake its odour for that of a dead animal. The Yoruba have been reported to have used it as a component of a charm to make hunters less visible in times of danger. In other parts of Nigeria, they have been used in the preparation of harmful charms by ethnic groups such as the Urhobo and the Ibibio people. The Igbo people of east-central Nigeria called stinkhorns Ero-mma, from the Igbo words for "mushroom" and "devil".