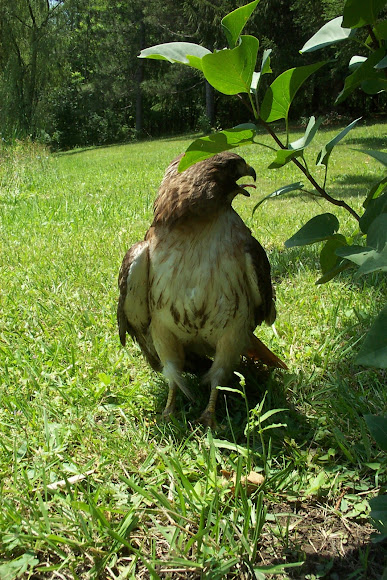 "A bird of prey, one of three species colloquially known in the United States as the "chickenhawk," though it rarely preys on standard sized chickens.[2] It breeds throughout most of North America, from western Alaska and northern Canada to as far south as Panama and the West Indies, and is one of the most common buteos in North America. Red-tailed Hawks can acclimate to all the biomes within its range. There are fourteen recognized subspecies, which vary in appearance and range. It is one of the largest members of the genus Buteo in North America, typically weighing from 690 to 1600 grams (1.5 to 3.5 pounds) and measuring 45–65 cm (18 to 26 in) in length, with a wingspan from 110 to 145 cm (43 to 57 in). The Red-tailed Hawk displays sexual dimorphism in size, with females averaging about 25% heavier than males." Wikipedia: http://en.wikipedia.org/wiki/Red-tailed_...

These photos were taken back in 2006 after I had had major shoulder surgery. I was on my way to the doctors for a check up, when I spotted this large female in the middle of the road. I knew something was wrong when she didn't fly as I slowed down and went past her. I spun the truck around blocking both lanes of traffic on the country road and grabbed a towel from my gym bag. I was able to walk right up to her without any issue. I put the towel over her to keep her calm, and returned home after purchasing some Kevlar welding gloves. I had to figure out what was wrong with her, at the same time my partner was calling local officials to notify them that we had the hawk, and it was injured and that we needed to either find a vet, or a wildlife rehab professional. I was able to locate a large tear in the skin along the inside of the left wing, with substantial bruising. Using one hand to keep hold of the talons, and my free hand to pour peroxide on the wound, I was able to get it cleaned out, clipped away the damaged feathers, and using surgical sutures that I had obtained from a friend (I keep those in my hunting pack for those just in case moments) I was able to close the open wound. We were able to find a rehab in the area and took "Freedom" to her for safe keeping and professional monitoring. After six weeks of my visiting three days a week with mice and rats, "Freedom" was well on her way to a full recovery. We decided that she was ready to go when she was flying around the enclosure without any issues. These photos were taken of her after her release. Somehow and for some reason I almost think she imprinted on me. I released her, and she flew right back and landed on the ground in front of me. I snapped several photos of her with my point and shoot. I walked back and sat in the car until she finally flew off into the woods and away. This was one of the Greatest life experiences I could have had. She was an inspiration to me through out my recovery time after my surgery, when I couldn't do much but drive around, or sit in the house. My life has been greatly enriched by the time spent with "Freedom" and knowing that I was able to save her from what would have been certain death in the road way. Thanks all for reading.

Joshua, repairing any damage on any bird is difficult, raptors add quite a bit more to the situation as they are armed with formidable weapons. Growing up on a farm with a flock of over 200 chickens gives one lots of practice with birds of various sizes. Many things can happen to birds some of which are not easily repaired without some knowledge of the anatomy and direct experience. While chickens are not an equal to a hawk, they are similar in size, and some can be quite fierce to deal with. (fully grown Rhodes Island Red Roosters are a perfect example).

im glad you knew what your were doing apparently, repairing the damaged wing. risky business...

I suggest you add this spotting to the "Raptors of North America" mission, Brandon. http://www.projectnoah.org/missions/8627...

Thank you so much Leuba! :-D I hope you never have to use the "tools" you keep in the car. It's nice to know though if you see an animal in need that you will step up and take care of it, and help it as best as you can!

I've rescued many animals over the years, from turtles, skunks, possum, snakes, and birds of all variety. I will say that, humans as a species can be quite unforgiving, they don't think about balance, and nature in ways that are meaningful, they only seek to control it, and master it by force. That is what I see as being the downfall of our race. Eventually mother nature is going to fight back, and it wont be pretty. I just hope that enough of us that care survive! :-D

It is a great history, Brandon, and I was really touched by it. I just pity the fact that some animals are more capable of attract affection than others. Just yesterday I found two guys about to kill a water snake, an animal that is not capable of doing any harm at all to anybody. But, being a snake, they assumed that it was a venomous one. Everybody is fond of butterflies, but destroy caterpillars mercilessly. I hope some day people will respect nature as a whole, not only the pretty part of it.

She'd surely remember and probably tell her young ones..
I carry a large rug, some tea towels and a cardboard box in the boot of my car ( should add gloves) - I don't know what for but, I've been lucky so far-there's been no need to use any. Sadly, we have the occasional dead kangaroo and I've reported injured ones. Anyway, I do hope you don't see any more injuries - to you or any animal !

It was an odd coincidence that we had injuries to the same part of our bodies. I do agree, you have to have some idea of what you are doing, most of my friends called me insane and crazy, I simply tell them that I am neither, and that it's more about caring than anything else.

When she flew away, I had to fight back tears, of joy and sadness, joy because she was healed and finally Free to fly the skies again, and sadness because I would never see her again (it was an unsuccessful attempt to hide the tears). When I go to my friends' house that is out that way, I often take the long way just to see if I can see her. I do often spot hawks in the area and like to think that one of them is Freedom, or even her offspring. :-)

Just came across this spotting ! what a lovely and touching story and experience. You should forever feel proud of what you did that day - well done Brandon!. It's amazing that you both had injuries around the same part of he body - tells you how much more human beings can do if they cared enough...you probably need to know what you're doing in some cases :). It must have been very emotional seeing her go away...thanks for sharing this.

I agree Noe and Pili. I will never forget this experience and the joy and happiness that I was able to help such a magnificent creature when it needed.

I am glad that your experience was a good one and that the Gannet was released successfully. To have that experience at such a young age is really something amazing. I only wish more people would think like we do and lend a hand when they see a creature in need instead of turning a blind eye.

Great story, Brandon!
When I was a child (maybe 8?), I was walking along the beach with my sister and we found a Northern Gannet entangled in a fishing net. It was very weak and dehydrated. We had to take it to a zoo because it was the only place where it could be attended. After a few days we received a phone call from the zoo telling us that the Northern Gannet was released successfully. I will never forget that bird, its size and its feathers when we took it by car to the zoo, and the satisfaction of knowing you've saved the life of a beautiful creature.

Doina, your English is fine, we can easily understand what you are communicating, it's our Romanian that's not so good.

Thank you Doina, and William. Colorado is a perfect example of Capitalism erupting into the environment. I lived in Parker, CO, for awhile and the change from 2000 to 2010 is incredible. Denver has pretty much swallowed Parker, and they are stating that by 2020 Castle Rock, will be a suburb of Denver... The urban sprawl is immense, and people wonder why they have issues with Coyotes, Bear, Snakes, Mountain Lion... If more people learned to live with nature instead of destroying it to make way for themselves.

I know this rescue stuff happens intensly where Capitalism erupts into the environment... Stop the XL Pipeline would be pro-active instead of removing toxic sludge from slick birds and wildlife in the future. Tell Obama/State Dept NO to the XL.
i shoulda proof read my post about the snake 'it agonizingly crawled' (not i) ~ i feel it knew it could get assistance... bright little reptile and same for the Red Tailed Hawk...

Fantastic stories! I'm glad when I read about such relationships between nature and humans; cost us so little to give nature a helping hand....
In turn, are so many animals that saved people!
My dog have now 15 years,is old, but had a chance to live after I found it hit by a car; with a broken leg (he was open fracture). I went with her to a children's hospital and I surgery ​​it there; a small group of resident doctors
had a makeshift operating room with them, in the hospital courtyard and work there all sorts of animals injured, this after I was with her to the vet but he has not assumed the risk of surgery!....
This year we had a great experience with a young Bee-Eater hurt , that he found a friend. I just attended his release, but was a fantastic moment! When it is in hand, caught a fly in flight !:) Then I realized that he can feed himself;
immediately after, flew in nearby tree!:) I was happy!
I did not ever I'll keep my favorite bird in hand and that I will be able to help...
Please, forgive me for my English!
Have a wonderful moments!

Isn't it nice to hear about some positive interactions between humans & wildlife for a change! :)

wat a amzing story of inspirations !! and the hawk tooooo is looking like a young bearded gentleman !!

Thank you Karen and Brandon for saving the Dog and Hawk!!

Thank you so much!! I hope that we see more and more spottings with stories like this.