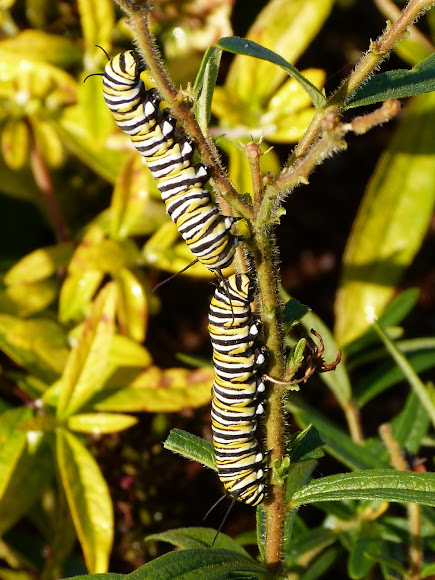 The eggs are laid by the females during spring and summer breeding months. The eggs are laid onto the leaves of milkweed plants.& hatch (after 4 days), revealing worm-like larvae, the caterpillars. The caterpillars consume their egg cases, then feed on milkweed, and sequester substances called cardenolides, a type of cardiac glycoside. During the caterpillar stage, monarchs store energy in the form of fat and nutrients to carry them through the non-feeding pupa stage. The caterpillar stage lasts around 2 weeks. In the pupa or chrysalis stage, the caterpillar spins a silk pad on a twig, leaf, etc., and hangs from this pad by its last pair of prolegs. It hangs upside down in the shape of a 'J', and then molts, leaving itself encased in an articulated green exoskeleton. At this point, hormonal changes occur, leading to the development of a butterfly (metamorphosis). The chrysalis darkens (the exoskeleton becomes transparent) a day before it emerges, and its orange and black wings can be seen. The mature butterfly emerges after about two pupal weeks and hangs from the split chrysalis for several hours until its wings are dry (often in the morning). Meanwhile fluids are pumped into the crinkled wings until they become full and stiff. Some of this orangey fluid (called meconium) drips from the wings. Finally (usually in the afternoon) the monarch spreads its wings, quivers them to be sure they are stiff, and then flies away, to feed on a variety of flowers, including milkweed flowers, red clover, and goldenrod. Monarchs can live a life of two to eight weeks in a garden having their host Asclepias plants and sufficient flowers for nectar. This is especially true if the flower garden happens to be surrounded by native forest that seems to be lacking in flowers.

I'll keep my fingers crossed for you! I look forward to seeing the photos!

it most certainly does. We are going to go outback shortly and see if I can catch the beavers tonight. Taking flashlights and my speedlite to see if I can get some decent shots of them, in the dark.

Thanks Brandon! I love to know if there is a story attached to a photo too - it can often make the most mundane subject really interesting!

Awesome!!! I bet he was most definitely wanting to get the heck out of "dodge." LOL!!!! glad you were able to get at least one photo! I want to thank you also for sharing your adventures here! It's nice to look at the pictures, but it's even better to get a back story to go along with them!!! Not many put into to words their journey to the capture of the image.

Inter-species cooperation - how funny! :)
Luckily the butterfly had the sense to fly up & settle in the recessed ceiling tray above our kitchen island. Both cats were tearing around on the worktop (which they know is off-limits!) but he was well out of reach. I had to put a step ladder on top of the island & coax him into a jar - it wasn't the easier task to achieve! I released him next to a buddleia but I only managed to get one shot before he took off - he obviously wasn't taking any chances & must have wanted to put as much distance as he could between him & the cats!
http://www.projectnoah.org/spottings/707...

LOL!!!! I can picture that!! My dog and the cat would definitely be teaming up on a butterfly!! When flies come in during the summer, they both have this technique they have developed. the cat will jump and swat them from the air, while the dog (75lbs of lab/shepherd mix) pounces on them on the floor and eats them. A butterfly would have a hard time indoors here. Very glad you were able to capture it and release it safely. :-D

Great idea! I am planning to bring one of the chrysalises indoors so I can study it & get a few shots of the butterfly emerging. My last attempt was a disaster - I brought a black swallowtail chrysalis indoors but miscalculated the dates & came home from a weekend away to find the butterfly flying all around the kitchen hotly pursued by my 2 cats! Luckily I was able to catch & release him outside unharmed!

Karen, I think I am going to try doing a time lapse of the chrysalis stage through the emergence and subsequent drying of the wings. I really think that would make an awesome time lapse series to put into a short video. :-D