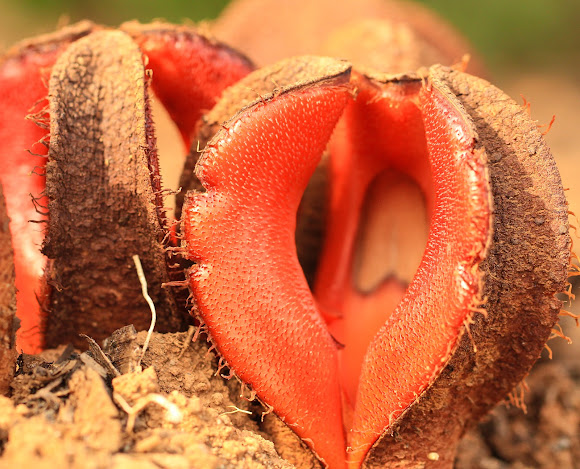 This fleshy flower body belongs to a subteranean parasitic plant in the family of Hydnoraceae. For most of its life it is un seen as it dwells beneath the surface as a parasite of the Euphorbiaceae family of plants. These parasites are achlorophyllous meaning they have no chlorophil and do not use photosynthesis. They get all their nutrients from the host plant directly by releasing an enzyme that slightly dissolves some of the host plants roots wich then allows this paraite to attach itself. Insects like carrion beetles as shown in the last picture, burrow into the closed flowers,(seen as closed pods), through the sepals attracted by a strong smell produced from the soft spongy red areas called osmophores. After some time, the flowers open and release the tricked beetle covered in pollen to move on and pollonate other plants.It grows a fruit under ground over a two year period similar in taste and texture to a potato. The fruit can be up to 8cm in diameter and have twenty thousand seeds. Animals using the fruit as a food source include Jackals that are attracted by the smell of rotting meat and hence its common name.

Semi Arid and arid regions as seen here close to the Karoo desert in South Africa.

Rhizome extracts are used in dysentery treatment in South Africa. The fruit is used in tanning and preserving fish nets as it is an astringent, meaning it shrinks or constricts body tissue. Its other common name amoung the Afrikaans Karoo community is Jakkalskos pronounced yak-als-skoff.

Congratulations on your SOTW.

Thank you AntónioGinjaGinja for the great news and thank you project noah team for the votes. Thank you Tukup, Zlatan and SukanyaDatta for the kind congrats.. I am absolutly over the moon !!

Congratulations Michael on your SOTW. The Jackal Food is truly an unusual organism. Thanks for bringing it to our attention,

Congratulations Michael , your Jackal Food,Hydnora africana, has been voted Project Noah’s Spotting of the Week,by the Ranger team!


Jackal food, Hydnora africana, is Project Noah’s Spotting of the Week! Hydnora africana is native to southern Africa and was beautifully spotted by power Noah user Michael Strydom. Jackal food is a parasitic plant that gathers nutrients from the roots of its host plant. It primarily grows underground, but after heavy rainfall an orange-colored fruit emerges. Natural pollinators are attracted to the strong smell of the fruit which carries an odor of feces. The plant temporarily traps insects to ensure that pollen is gathered. After a few days, the plant flowers and opens, enabling the insects to leave and spread the plant’s pollen.

Thanks Maria !! :) Very lucky find. never seen one before i found this.

Hi Tukup, thank you so much. I've been away from project noah for a bit and its really nice to come back with something different!! fingers crossed for monday! :)

Hi Ashley, greatly appreciate the nomination. Have a great weekend!

Hi Dawn Lopez-Garanzuay. Thank you for the kind words!! :)

That is a really cool spotting!

Fascinating notes. Thanks for a good read.

Hi Single D !! Very glad you liked it and it helped!! :) Thank you for the awesome comment!!

Just had some new education from your beautiful spotting. Thank you.

Hi Niel!! As always thanks very much for your kind words! I am really glad i helped out. To be honest when i first found it i assumed it was a fungus as well. Not very plant like at all. :)

Thanks for sharing this, Michael. Such a fascinating species that I thought initially was a fungus. Your excellent notes put me straight. Awesome spotting!